Culture shock in an unlikely situation: Australia to Canada

How is this even possible? Everyone tells you how similar the cultures are, how the people are the same, the activities and hobbies. When I moved to Canada I was completely unprepared for culture shock. I studied International Business, so really should have known better.

Grocery Shopping
You finally move out of a hotel room, to a place with a kitchen. The moment youâve been waiting for, finally a home cooked meal, something that will quell the homesickness thatâs come about after the initial excitement starts wearing off. We should have found a small supermarket, a Safeway or a local natural store. Instead we venture into a giant, I mean weâd managed to buy snacks there no problems. After 20 minutes of wandering aisles thereâs almost tears. Every box of cereal seems to be frosted, garbage bags and washing detergent are not in obvious places and goodness help you tampons and toothpaste are nowhere to be found.

Local Friends
Canadians are well known for being super friendly. This is most definitely true, however sometimes it can be hard to get in with a local crowd. We got lucky due to a random friend of a friend who welcomed us into her fold, however it isnât always that easy. Australians are pushy and needy friends, we generally force ourselves into other people lives and expect people to want to hang out with us all the time. This generally not the Canadian way, they may resist. Push on, blame it on your culture and appreciate that you will eventually have people from your host country that you can call true friends. 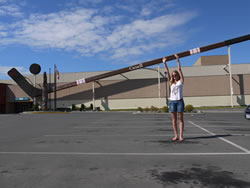 I love you Canada, but sometimes youâre weird

Conversation
Isnât it lucky you moved to a country where you speak the same language? For the most part everything is fine, you get teased a bit and people ask you why you add an ârâ to the end of your âaâsâ. Luckily for you, youâve watched a lot of American TV so itâs not usually that hard to translate into Canadian. You know itâs a âsweaterâ, âtrunkâ and âgarbageâ. You will never use âfingeringâ, âpopâ or âtoqueâ except for translating purposes but youâve worked out what they mean.

Itâs not until you try and make a phone call does everything turn badly. Itâs like youâre speaking an entirely different language and no number of repeating yourself gets you anywhere. Smiling and speaking as slow as possible eases the process, give yourself 12 months and your friends back home will ask why you sound so Canadian. The shame.

Spitting
You were still in primary school when you saw a t-shirt from Singapore that had a list of illegal activities, one of those being spitting. What a place you thought! Never would you deal with the stomach clench that comes with witnessing something so disgusting. Sadly in Canada chewing tobacco is a thing, and spitting is common, how it is acceptable in a modern society youâll never understand. Your stomach clenches on a regular basis and thoughts of moving to Singapore are never far away.

Sports
Normally this is a way to bond, especially for men. Here, no one cares about your ACT Brumbies or Queensland Lions. Cricket is a complete joke, though luckily at the moment so is the Australian Cricket teamâ¦ You have no idea what âicingâ is aside for something you put on a cake and âin the creaseâ sounds like something from a dirty movie. You had no clue that the CFL was actually a thing, and all you can work out is itâs an even stranger version of the NFL.

This is one of the easiest to deal with however, as one live ice hockey game will turn you into a convert. Have a good season with your team and youâll be looking up what channels youâll need to get to watch the NHL when you move home.

Credit
I understand that you are a professional with a well paying job, you had a perfect credit score at home and youâve had a credit card since you were 18. In Canada none of this matters, and being treated as though youâre worse than bankrupt will cause you to have all sorts of criminal thoughts about your bank. Youâll learn the hard way that applying for multiple credit cards actually is putting a black mark against your score, and that the only way to build good credit is to have a fully secured credit card. This means lending the bank money, and then they charge you interest to borrow it back. That makes perfect sense right?

Culture shock as Iâve learnt can strike any time. Homesickness, tiredness, and stress come with every move no matter how far you go and how prepared you think you are. These may make culture shock seem worse than it actually is. Culture shock means youâre experiencing something new (which is usually a good thing), and just think, youâve got reverse culture shock to look forward to if you move back home!

Grab a badge that links to this contest entry!

Copy and paste code to display this Contest Entry Badge:

I would never imagine the Canadians wouldn't understand the Australians, they speak the same language! About the credit rating and paying interest for money you lent the bank is funny. Why would you need a card if you had the money?

Leave a great comment and help to WIN a prize: