The Beginning of an Addiction in Rome 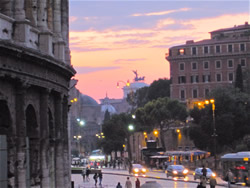 âThank you,â the TSA agent said to me as he handed back my boarding pass. I turned around one last time and tearfully waved to my parents, who were standing just across the entrance to security. With my laptop in a grey, plastic bin, I took a deep breath and stepped through the metal detector. One step closer to my new life as an expat in Italy.

Romeâs Fiumicino is one of the only airports Iâve been to that seems to fully reflect the personality of the city it serves. No one seems to be in a hurry, and stylish passengers sit casually sipping tiny cups of espresso. It sometimes takes hours to get your bag, and people shout and gesture passionately while they wait.

Iâd been here four months before, in tears as a plane took me away from the city I loved after four months of studying. As I nervously thumbed through my bag, triple checking I had my new host motherâs phone number, I couldnât help but wonder what Iâd gotten myself into. I was back in Rome, right where I wanted to be, but on the condition that I lived with a family and took care of their children. For a paltry sum, at that.

With my bag finally in tow, I breezed past Italyâs non-existent customs and tapped Doroteaâs number into my phone. I wasnât sure what to expect. Iâd done everything I was supposed to. After finding her profile on one of the countless au pair websites, weâd emailed for a while, ironing out all the kinks such as working hours, living conditions, expected duties, and pay. Weâd discussed the childrenâs personalities over Skype and Iâd exchanged messages with former au pairs. But virtual communication only gives so much away.

The car ride was not nearly as awkward as Iâd expected, and when we got to the apartment, a sign hung on the door that read, âWelcome Home!â The family prepared a big lunch and then the kids showed me to the gelato shop around the corner. We sat on the tile floor in the living room, licking straciatella cones and reading the English books Iâd brought.

I soon settled into the routine of the job. Setting the table for breakfast in the morning, tidying the kidsâ rooms after they went to school, trying to find online streams of my favorite shows from home, helping to prepare dinner, and then climbing into bed in my tiny basement room at night.

It was fine. But I was far removed from the Rome I had known and loved as a student. That, and pictures had started popping up on Facebook showing my friends at football games in our college town and going on weekends away together. The fear of missing their lives, and the longer-than-expected hours in an apartment much farther from the city center than Iâd imagined, started eating away at me. My expat dreams were crumbling around me a mere two weeks after arriving.

I decided that friends were what I needed. With the help of a Facebook group for au pairs in Rome, I met a few girls in the city center for coffee. We sat at a sidewalk cafe, under an awning as rain pelted down, and bitched about life as an au pair and the cost of cocktails in the city. The storm passed and the sun slowly dropped behind the Colosseum in a pink and purple swirl.
The friendships progressed at a pace that I think only expat friendships can. Soon we were meeting up for afternoon coffees during the week, some with charges strapped to them, and then converging at a youth hostel near the main train station for the cheapest vodka cranberries in town. We shared language learning tips and wondered why Italian families insisted on eating dinner so late.

With work not being the only thing in my life, everything else started to fall into place. The barista at my neighborhood cafe knew my order before I even opened my mouth (un caffe e un cornetto con nutella, per favore), I had the most convenient bus routes memorized, and knew the best place in every neighborhood to find my favorite food: suppli.

âHow about a day in Naples?â an au pair friend asked over pizza and carafes of wine a few months after weâd met. The next day we were speeding south through Lazio toward the birthplace of pizza. A Tren Italia employee made his way into our compartment. Alone and listening to music, I tried to avoid eye contact.

âGli stati uniti,â I mumbled in reply as I looked out the window hoping my disinterest was apparent. He tried to continue the conversation, I squeaked out something about being tired, shut my eyes, and felt his hand on my thigh. I stood up and left, trying to find my friend, disgusted and frustrated.

I returned to Rome and the next day I wandered around the horribly organized market for nearly twenty minutes trying to find chicken stock cubes for the dinner I had planned, fumed as I waited in an almost half hour checkout line while three employees stood around doing what seemed to be nothing, and then stumbled over my Italian words as I tried to explain the mix-up over the total.

My time in Rome began to wind down, a US citizen is only allowed to stay in the Schengen Zone for 90 days without a visa, something Italy does not provide for au pairs. One of the children I cared for had her birthday. The grandmother came over with a sheet of tiramisu in lieu of a cake. Candles were placed in the middle and soon I was licking amaretto soaked lady fingers off my fork.

I spent my last night in Rome eating donuts smothered in Nutella at the Christmas market in Piazza Navona. I cried as the night bus drove out of Piazza Venezia, down Via del Corso, and up to Piazza della Repubblica and said goodbye to the city Iâd made my home.

I came back to the United States. I spent ten months sitting behind a desk selling internet and phone service before realizing that, for me, expat life had become an addiction. Life at home was too easy. Speaking English was boring. So, I moved to Seoul for another chance at expat life.

Amanda Slavinsky is a freelance writer originally from Michigan. She moved to Seoul in 2011 and teaches writing to elementary ESL students. Addicted to travel, Amanda canât stay still for very long. She spends most of her time researching her next trip, eating, and blogging about it all on her blog.
Blog address: http://farsicknessblog.com Twitter: @farsickness
Vote for this:

Nice piece! I love this line: "The friendships progressed at a pace that I think only expat friendships can." So very true of expat life.

Leave a great comment and help to WIN a prize: