Want to get involved? Become a Featured Expat and take our interview.
Become a Local Expert and contribute articles.
Get in touch today!
Filed: Interviews,Mongolia
Peter Bittner is a travel writer and photographer who recently returned from a year as a Fulbright English Teaching Assistant Fellow in Ulaanbaatar, Mongolia. He has a passion for wandering off the beaten path, exploring diverse cultures, and getting outdoors via hiking, camping, and horseback riding. Peter chronicled his adventures this past year in his blog, peterswanderings.com. Currently, as part of his successful Kickstarter campaign, he is working on an eBook, photo book, and e-newsletter to share his experiences in the âLand of the Eternal Blue Sky.â He aims in his work to promote curiosity, cross-cultural understanding, and increased levels of awareness regarding salient environmental, social, and economic crises, focusing on cultures undergoing extreme changes due to forces of globalization. Employing rigorous research, first-person narratives, and iconic photography, he hopes to share with the world a nomadic people in the midst of an unprecedented transition towards urban ways of life. Peter's expat blog is called Mongolian Musings (see listing here) 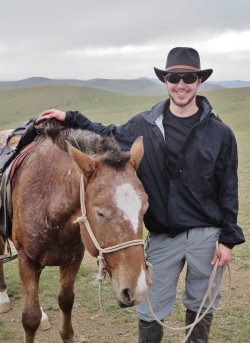 Peter with tired Mongolian horse on a day ride outside Ulaanbaatar.

Here's the interview with Peter...

Where are you originally from?
Iâm from Boston, Massachusetts, USA but lived in Paris, France and Bilbao, Spain until I was five years old. I caught the travel bug early!

In which country and city are you living now?
I just returned from Ulaanbaatar, Mongolia.

How long have you lived in Mongolia and how long are you planning to stay?
Iâve recently moved back to the States after a year in Mongolia. 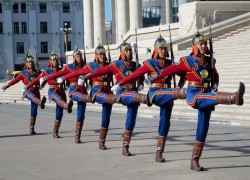 The Mongolian National Color Guard marches in rhythm.
Why did you move to Mongolia and what do you do?
I moved there as a Fulbright English Teaching Assistant Fellow, a US State Department-funded program. As a native English speaker and cultural ambassador in a Mongolian vocational school, I co-taught classes to students studying to be painters, secretaries, graphic designers, and tour guides. I tutored teachers, organized and led English clubs, and wrote an introductory art textbook for beginning English students.

Did you bring family with you?
No I didn't.

How did you find the transition to living in a foreign country?
Iâve lived abroad several times and traveled extensively in Asia but it was still a challenging, although incredibly worthwhile, transition.

Was it easy making friends and meeting people; do you mainly socialise with other expats?
The expat community is fairly small and Mongolia doesnât yet have the foreigner-friendly atmosphere that other major Asian cities, like Seoul or Tokyo, offer. Living in Mongolia can be very difficult for many non-seasoned travelers and some expats seem to dwell on that too much. That said, there are some great clubs for expats interested in hiking and horseback riding that are easy to find on Facebook. 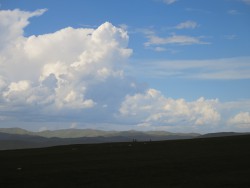 The rolling, expansive hills of the central plains!
What are the best things to do in the area; anything to recommend to future expats?
Get outside of the urban areas as much as possible! Hiking, horseback riding, rafting, camel riding, and staying with nomads are all great fun. Mongolia is one of the most beautiful countries Iâve ever seen and geographically itâs incredibly diverse! From the Gobi desert in the south to the green rolling plains of the central steppe to the dense woodlands in the north, thereâs a huge variety of stunning flora and fauna to appreciate while taking in the amazing views.

What do you enjoy most about living in Mongolia?
It's hard to overstate how much I enjoyed living in Mongolia. The opportunities to engage with and learn from locals about their unique culture and traditions, explore the stunningly gorgeous countryside, and to contribute in a small way to the rapidly developing country's education system, were all worthwhile. The friends I met there, Mongolian and foreigners alike, all helped broaden my worldview and better understand and appreciate my own culture.

How does the cost of living in Mongolia compare to home?
The cost of living was very low compared to the United States but it depends on your spending habits. I spent around $450/month excluding accommodations. If you tend to go out to restaurants and bars a lot, shop at Western clothing outlets, high end groceries, or buy new gadgets and electronics, things can quickly add up but there! But, if you are more conscious about your spending, it is very easy to save money in my opinion. There are plenty of ways to cut costs from eating in less upscale restaurants to buying fewer pricy imported foods, etc. 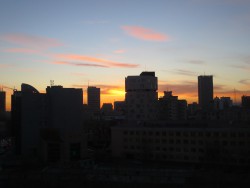 Ulaanbaatar's skyline at dusk.
What negatives, if any, are there to living in Mongolia?
One negative aspect of living in Mongolia is that foreigners can occasionally be targets for discrimination and even violence due to growing nationalism. Particularly at night, foreigners should be on their guard and use good judgmentâas they would if living in any major city. The social phenomenon is partially a reaction to the opening up of Mongolia to the forces of globalization and a recent economic turbulence disproportionately blamed on international investors and markets. Both foreign women, who sometimes deal with street harassment, and men, particularly those dating Mongolian women publicly, can be targets. Overwhelmingly, the vast majority of Mongolians are warm and welcoming people and, once you break the ice and enter their social groups, they will look after you very well! If interested in reading more about this complex issue, please see my article here: http://www.kristafoundation.org/index.cfm/page/serving-as-the-other/

If you could pick one piece of advice to anyone moving to Mongolia, what would it be?
Iâll let you in on a secret thatâs true everywhere, but particularly for foreigners traveling to or living in Mongolia. Your attitude will determine your experience. If you make an effort to get to know locals and understand their culture, keep an open mind, are patient, flexible, and respectful, AMAZING opportunities will pop upâseemingly out of nowhere. Things that can only happen in Mongolia: throat-singing, wrestling tournaments, fashion shows with traditional dress, horseback riding, hiking to remote monasteries, visiting herders. My favorite and most memorable experiences involved locals!

What has been the hardest aspect to your expat experience so far?
The air pollution in Ulaanbaatar is horrible. Itâs the most polluted city in the world for several months each year; the worst period is between November and February. The rest of the year itâs not bad at all! You should absolutely wear a mask during the winter if you choose to live there and buy yourself a good air purifier before you move too.

Search online for âTechno masksâ with neoprene covers and replaceable filters. Theyâre just about the best you can find and many expats use them, although theyâre too expensive for locals and there is not much awareness about the risks of prolonged exposure over oneâs lifetime. For indoor air purifiers, check out products by Alen and Honeywell with UV and/or ionization technology and replaceable filters. For an in-depth post on the pollution risks along with pictures from my time there check out my previous post: http://peterswanderings.com/2013/12/

When you finally return home, how do you think you'll cope with repatriation?
I've been home for several months now and it's been challenging in certain ways: adjusting to the incredible consumer choice found in supermarkets, feeling flooded with English rather than Mongolian, clicking into a familiar routine and culture after a year full of amazing surprises and adventures! Despite the challenges, I deeply miss living in Mongolia.

What are your top 5 expat tips for anyone following in your footsteps? Tell us a bit about your own expat blog.
My blog chronicles my adventures in urban and rural Mongolia, featuring first-person narratives, photos, and rigorously-researched journalistic articles. While I'm focusing on my Kickstarter project now, I'll post more updates there in the future.

How can you be contacted for further advice to future expats coming to your area?
A lot of people contact me via email with questions about traveling or moving and I'm more than happy to respond with resources and contacts. Please reach out!

Peter is an American expat living in Mongolia. Blog description: An American in Ulaanbaatar...