Want to get involved? Become a Featured Expat and take our interview.
Become a Local Expert and contribute articles.
Get in touch today!
Filed: Interviews,Honduras
Rika is a Canadian paralegal-turned-Caribbean scuba diving instructor who decided life in a cubicle wasn't for her. She threw away her high heels, moved to a tropical island in 2012 and became a scuba diving instructor. Rika loves rum drinks at sunset, keeping tarantulas out of her house with her machete, and scaring her divers with sharks. Rika's expat blog is called Cubicle Throwdown (see listing here) 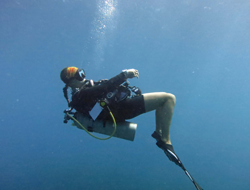 welcome to my office

Here's the interview with Rika...

Where are you originally from?
I usually tell people I'm from Vancouver, Canada, because that's the only place besides Toronto that non-Canadians seem to know. I'm really from all over Canada, as my dad was an air force pilot and we moved every few years. I spent most of my formative years in Saskatchewan, so that's where I say I'm from most of the time.

In which country and city are you living now?
I live on an island called Roatan. It's part of Honduras, in Central America. Roatan is a tiny island (about 30 miles long and 5 miles wide) in the Western Caribbean, under Belize and Cuba. There's not really any 'cities' on the island, just little villages and towns.

How long have you lived in Honduras and how long are you planning to stay?
I've been here two years now and have no clue when I'm going to leave. I planned to come for six months, and I've gone on a couple adventures off island for a month or two but always ended up back here. They call it the Roatan Vortex, and I think it's real! I would like to try to repeat this dive instructor expat lifestyle somewhere else in the future though, part of the reason I became a dive instructor was so I could travel and work in exotic locations where I normally wouldn't be able to afford to stick around for awhile. On the wishlist: the Maldives, Thailand, Borneo, Indonesia, French Polynesia and Belize! (I better get going, that's a big list.) 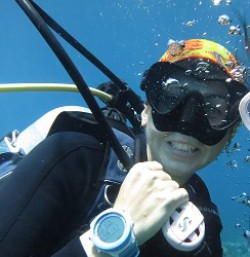 hard at work
Why did you move to Honduras and what do you do?
I moved here to complete my professional dive training - my divemaster and instructor courses, and that's exactly what I did. Once I finished them I got a job as a dive instructor at the resort I did my courses through, and I still work for the same company, although I manage their new second shop now and dive much less.

Did you bring family with you?
Nope! That was the whole point of moving down here. I had nothing tying me down in Canada.

How did you find the transition to living in a foreign country?
Well, it's not that difficult here, because almost everyone on Roatan speaks English, which can be a huge barrier in a foreign country if you don't speak their language. There's also an American grocery store so you can get all the things you're used to at home: Hellmans mayo, Kraft salad dressing, Chobani greek yogurt, etc. The things that were hardest to transition for me were cultural stuff, like the 'island time' and their standards for customer service. I'm pretty type A, so when I got here that stuff really bothered me. I'm getting used to it now!

Was it easy making friends and meeting people; do you mainly socialise with other expats?
It's easy to meet people here - friends are a different story. On a small island, one wrong move can destroy your reputation pretty quickly. A lot of expats and local islanders can seem a bit aloof at first, and that was hard for me to understand when I was on holiday here and when I first moved here. But people need to remember that expats are constantly having people come and go as this is a really transient place, and it's hard for us to spend lots of time or energy with new people every single week. Many prefer to nurture friendships and relationships with those they know are going to stay, not those just passing through. A lot of us also work in the tourism industry, and it's difficult sometimes to be 'on' all day at work with tourists, and then going out and night and having to stay 'on' since the tourists are out too (it's a small island!). I would say I have a 70/30 split of local islander friends to expat friends. This number seems pretty high compared to most expats I know here...they mainly hang out with other expats. 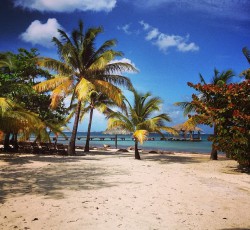 the view from my dive shop
What are the best things to do in the area; anything to recommend to future expats?
Roatan is a scuba diving mecca, and there isn't much to do here other than drink and dive. So if you hate both of those things, don't move to Roatan :)

What do you enjoy most about living in Honduras?
I enjoy diving, which is the #1 reason I moved here. I enjoy wearing whatever I want to work, the freedom of a non-corporate atmosphere and getting to show people from all over the world my underwater office! I love the natural beauty of the jungle and the ocean, and the crazy nights that only happen 'on the rock'. I also love how polite people are - always a good morning, or hola, or a head nod or honk when you pass someone on the road.

How does the cost of living in Honduras compare to home?
I've done several cost-of-living posts on my blog, and in reality, it's not that much cheaper. This isn't Indonesia or China - you aren't going to be able to eat out all day for $6. Groceries are very expensive, and so is electricity and water (remember, it's an island so everything is going to be more expensive here). Rent is maybe a bit cheaper, but the quality of apartments and houses in lower rental ranges is very poor. Going out at night is cheaper though - drinks are $2-3 and you don't have to spend money on fancy clothes to go out, since everyone is wearing flip flops! 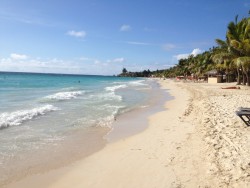 west bay beach, roatan
What negatives, if any, are there to living in Honduras?
There are certainly negatives. The power is unreliable, surges all the time and destroys electronics (don't even get me started on how hot it gets with no A/C or fan to cool you off in +44C heat when the power is out for hours at a time). The heat and bugs can be oppressive. There is crime on the island, and some of it is targeted at foreigners because we are thought of as having tons of money (even if we live here and make the same wages as the islanders). Most of it can be avoided with some common sense though. I also drive a scooter, and driving can be really dangerous. There are tons of taxis and they can be reckless on the road. Oh, and the lack of good food is a huge drawback for me. Island food is delicious but not very healthy, and most restaurants here make expensive and terrible versions of American food, which I hate. I would give my right arm for some decent sushi or pho!

If you could pick one piece of advice to anyone moving to Honduras, what would it be?
Don't expect anything to go the way it goes at home. "Because this is Roatan" is a perfectly acceptable answer to many frustrations expats feel here, and it isn't going to change for you, so get used to it or move on.

What has been the hardest aspect to your expat experience so far?
Lack of good sushi. No, just kidding. I would say probably trying to find a balance - I work way more than I ever did back in Canada and don't really make enough money or have enough time off to enjoy the island they way I would like to. I wasn't very realistic about that part of life here before I moved, and it was an unhappy surprise.

When you finally return home, how do you think you'll cope with repatriation?
I went home for a visit last summer, and the noise, people, traffic lights, etc. in the city was really overwhelming for me after being in such a small place for so long. I was saying "good morning" and smiling at everyone like I'm expected to here on the island, and people looked at me like I was crazy. I also just about choked when my bill for one beer was $12 before tax and tip! I think I'll be okay and I'll definitely be glad to see vegetables again, but I'll need to find a job out of a cubicle - I don't think I can do that again. caribbean days off involve drinks and dancing above the ocean
What are your top 5 expat tips for anyone following in your footsteps? Tell us a bit about your own expat blog.
I started my blog after my first holiday to Roatan, when I had decided I wanted to move here and become a dive instructor. It chronicled my ups and downs of trying to save enough money to move here, arriving on the island, doing my divemaster and instructor courses, and eventually my expat life here. There are plenty of adventures and misadventures on it!

How can you be contacted for further advice to future expats coming to your area?
Other than email and Twitter, you can find lots of info on my blog (http://www.cubiclethrowdown.com) or find me on Facebook (http://www.facebook.com/CubicleThrowdown), or Google+ (http://http://plus.google.com/+RikaFromCubicleThrowdown). Please make sure you read through my blog and use my 'search' feature before contacting me - I would love to help everyone but don't have a ton of free time, and there are a lot of answers on my blog already :)

Rika is a Canadian expat living in Honduras. Blog description: Rika blogs about life as an expat dive instructor in Roatan, Honduras - diving, traveling, enjoying life and leaving the cubicles for the lemmings.