Want to get involved? Become a Featured Expat and take our interview.
Become a Local Expert and contribute articles.
Get in touch today!
Filed: Interviews,Hong Kong
Stewart spent six months in Thailand when he was 21, and Asia got under his skin. Not literally, of course, although he has suffered more insect bites than was previously thought possible. He has since visited Japan, Malaysia, Taiwan, China, Singapore, Vietnam, and Laos. Even when back in the UK he worked with Japanese people. He settled in Hong Kong last year. Stewart's expat blog is called What I Did In Hong Kong (see listing here)

Here's the interview with Stewart...

In which country and city are you living now?
The Special Administrative Region of Hong Kong, which is in China (no matter what the locals tell you).

How long have you lived in Hong Kong and how long are you planning to stay?
I've been in Hong Kong for a year and a half and will be staying indefinitely...

One of the best hikes in Hong Kong - Big Wave Bay in Sai Kung
Why did you move to Hong Kong and what do you do?
I moved because I had a strong desire to try living abroad, and ended up in Hong Kong after falling in love with a local. I now teach English at an international primary school.

Did you bring family with you?
No, I was trying to get away from them...

How did you find the transition to living in a foreign country?
Pretty easy, as Hong Kong is not very foreign at all. Especially for a Brit, with them driving on the left and all the streets being named after old governors. In truth, it's as foreign as you make it - there are plenty of Chinese areas where you won't see many other western faces and there are plenty of places that make you feel as though you are out in Soho, London. Perhaps to emphasise this, one of the main nightlife areas here is called 'Soho'.

A typically busy Hong Kong tea house
What do you enjoy most about living in Hong Kong?
The convenience of it all. Maybe it's because I had never lived in a big city before coming here, but I am amazed that I can go to the cinema, get my haircut, go to the gym, go to a bar, go out for dinner, do the weekly shop, visit a temple, get my fortune told... all in a 5 minute walk from my flat. Plus, being Scottish, I will never get over the novelty of being able to swim outdoors knowing you won't turn blue.

How does the cost of living in Hong Kong compare to the UK?
Day to day living (food, transport etc) is cheaper than the UK. Electronics and so on are about the same. Rent and property are outrageously expensive.

What negatives, if any, are there to living here?
It is a busy city, where everything moves at a mile a minute and sometimes you just wish it would slow down for a while. And while it is busy, it isn't a 'big' city, so all this energy is concentrated into a pretty small strip of land with hills on either side. However, and this is something I didn't realise before I came here, Hong Kong has so much countryside, so many trails and islands, that it is easy to leave all the noise behind if you have an inclination to explore. 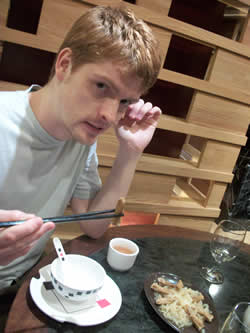 Me enjoying a dish of duck's tongue, the last is a street scene from Yau Ma Tei, where I live
If you could pick one piece of advice to anyone moving here, what would it be?
If you choose to live on Hong Kong island, then do take the time to leave it once every so often.

What has been the hardest aspect to your expat experience so far?
The usual, I guess - occasional homesickness, taking time to build up new circles of friends, resisting the urge to scream when crammed in like a factory chicken on the subway. And the climate - the throbbing, dripping summer heat.

What are your top 5 expat tips for anyone following in your footsteps?
Some of these are general, some Hong Kong specific... 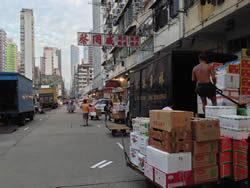 Tell us a bit about your own expat blog.
It's simply a vehicle for writing my thoughts and putting up a few pictures for people I know and some that I don't. So much has been written about living in Hong Kong (many people do live here, after all) and I'm not trying to write anything new or controversial. I also do a lot of creative writing (see the link on my blog!) and I feel that blogging really helps the creative process.

How can you be contacted for further advice to future expats coming to your area?
On my blog.

Stewart is a Scottish expat living in Hong Kong. Blog description: An exiled Scot, enjoying life in Hong Kong (because, let's face it, there are more difficult places to live...) and every so often finding something odd to write about.