Want to get involved? Become a Featured Expat and take our interview.
Become a Local Expert and contribute articles.
Get in touch today!
Filed: Interviews,Spain
Jiab, born and raised in Thailand, is from one side of the world.

Jim, a born and bred Texan, is from the other side.

Jiab is quiet, serious, and reserved. She has a no-nonsense attitude, is frugal, and analyzes every decision with meticulous mathematical precision, living by the motto, âWhen you think youâve double-checked the figures enough, do it one more time.â Through her perseverance and ability, Jiab helped break both the glass (women) and bamboo (Asian) ceilings to become a vice president at a major bank.

Jim, by contrast, lives by the motto âDignity is overratedâ and âThereâs no such thing as an unexpressed thought.â Jimâs passion has been the art of communication, and particularly media literacy, or how do we teach kids to be discriminating and savvy consumers of information. To that end, he has gone from teacher to author of articles and textbooks on the subject. Jiab & Jim's expat blog is called Your Third Life (see listing here) 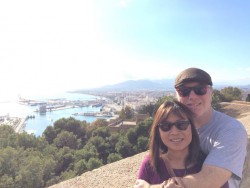 Here's the interview with Jiab & Jim...

Where are you originally from?
Jiab was born and grew up in Thailand. She came to the US for graduate school and stayed, despite the lack of good noodle soup.

Jim was born and raised in the once and seemingly eternal Republic of Texas. Jim's parents took him to far away, exotic places, but to their consternation he always managed to find his way back.

In which country and city are you living now?
Granada, Spain

How long have you lived in Spain and how long are you planning to stay?
Two months. We're not sure how long or any definite plans for the future, so let's say for now until they throw Spanish dirt on our graves. 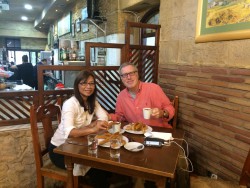 Did we mention the food? Churros and chocolate in the morning, tapas at night!
Why did you move to Spain and what do you do?
We moved here to have a third life, our time to wander and wonder at the marvels of the world. As for why Granada, we lay it out in our blog, but the short answer is we loved that it is a medium sized college town, a good balance of local and tourist vivacity, lots of history, and someone left some mountains and beautiful scenery here for us to enjoy!

Nowadays, we are both writers. Jiab works free-lance writing articles about finances, and Jim is rolling out a three book series on media literacy (publisher Rowman & Littlefield) Spring 2019.

Did you bring family with you?
Our sons are seeking their own fortunes in Wisconsin and Tokyo (so we split the difference). More important to us was that we brought our two cats, who we think are ahead of us in learning Spanish.

How did you find the transition to living in a foreign country?
Jiab (the detailed one) did a lot of research, and we were open to adapting, so it has been fun! Granadans have a reputation for being short with people, perhaps even non-friendly, but we have found that if you make an honest effort, they more than go out of their way to help you! Our two biggest challenges in adjustment are the language (we are just now taking Spanish courses) and having dinner between 10:00 and midnight!

Was it easy making friends and meeting people; do you mainly socialise with other expats?
We reached out beforehand and joined several groups. We meet regularly with a wonderful group of expats from all over the world (Armenia, France, England, Syria), have met up with individuals from the States and beyond, and have also made friends with people in our Spanish class. It's all about the effort, knowing everyone is a bit in the same boat, and that whatever one's background, we are all now Granadans. 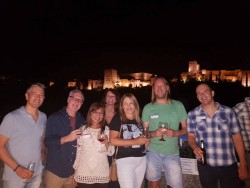 Meeting other expats makes things fun and gives you a support network.
What are the best things to do in the area; anything to recommend to future expats?
There is a vibrant evening life of cafes, flamenco dancing, and strolling ("Only tourists pay for tapas."). The city is rich in History to explore, and the surrounding countryside, from the tallest mountain in Spain to the quaint villages are great day trips.

What do you enjoy most about living in Spain?
The casual openness of the Spanish lifestyle. If we don't get it done today, there's always tomorrow. People put their priorities into enjoying life and each other, not prepping so they can enjoy life "later."

How does the cost of living in Spain compare to home?
Jiab did a thorough blog on her research. She found, using an index, that Granadan cost of living is 2/3 of Dallas, where we came form, and 1/3 that of New York! Then there's the healthcare, which is affordable (and high quality) for everyone! 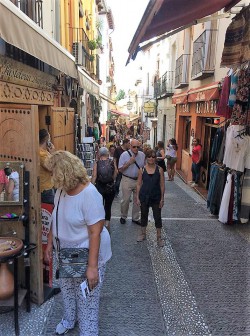 Exploring the historical twisty streets of the AlbaicÃ­n (ancient quarter)
What negatives, if any, are there to living in Spain?
Our only negative so far has been the lack of English speakers. The universal answer to "Hablas ingles?" is "a little," but often those two words is the extent of it. We're working on this from our end, however, picking up Spanish poco a poco, little by little.

If you could pick one piece of advice to anyone moving to Spain, what would it be?
Take Spanish before coming here. Also, know that the Spanish Bureaucracy works on their terms and timetable. Don't expect American speed, consistency, or affability in dealing with it.

What has been the hardest aspect to your expat experience so far?
Because of the language, but also the adjustment, everything at first takes more effort. Explaining what I want from the barber, or asking for less ripe fruit at the market, requires frantic typing, hand gestures, and hope.

When you finally return home, how do you think you'll cope with repatriation?
We're not sure we are going back long term. Short term people have told us that it's a shock to re-experience the heaviness (and huge portions) of American food.

Also, the get it done/productivity rush that we left behind now seems to pointless and self-defeating. 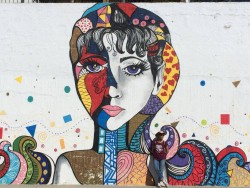 Wander and wondering, we constantly find great new things in Spain.
What are your top 5 expat tips for anyone following in your footsteps? Tell us a bit about your own expat blog.
The blog began with our decision to retire and research into relocating, and has continued with our transition. Jiab writes about the financial and practical aspects of our transition (and has been featured in international finance publications such as Humble Dollar). Jim writes about the social transition, as well as the historical and philosophical discoveries awaiting relocaters like ourselves. It's all about wandering, and wondering, now that we have the chance.

How can you be contacted for further advice to future expats coming to your area?
Visit us at yourthirdlife.com and use the contact form. If you are ever in Granada, reach out.

Jiab & Jim is an American expat living in Spain. Blog description: Freedom to Wander / Time to Wonder. Sharing our journey as we retire, relocate, and acculturate into our new life wandering and wondering about the world. We offer pragmatic financial perspectives while also reflecting on the more sentimental moments of the adventure.