Want to get involved? Become a Featured Expat and take our interview.
Become a Local Expert and contribute articles.
Get in touch today!
Filed: Interviews,Germany
Paul is from a large town in the UK called Swindon. At more than one point, he told himself he would probably never live in another town or city in his life-time because Swindon had everything he needed.... How wrong he was.

In 2014 Paul met a German girlfriend and since then has moved with her to live in 3 different cities; Amsterdam, Frankfurt and now Wiesbaden, Germany. A former broadcaster for the American Forces Network in Wiesbaden he was affectionately known as "Paul the Brit" to his largely American ex-pat audience where he would use his daily 4 hour morning radio show to talk about all things ex-pat.

Paul always wrote about his experiences in his blog "The top 100 things I notice about living in Germany" and with his passion for connecting people; such as ex-pats to the communities they live in, he has also included Vlogs, Podcasts and newspaper articles about his life as an expat - all of which can be found on his website www.paulthebrit.com Paul's expat blog is called Things I Notice About Living in Germany (see listing here) 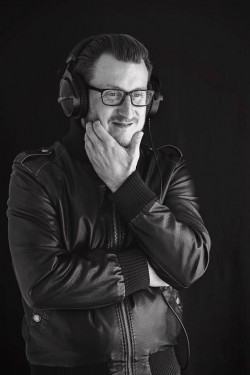 Here's the interview with Paul...

Where are you originally from?
The small town of Swindon in Wiltshire, UK.

In which country and city are you living now?
Wiesbaden, Germany

How long have you lived in Germany and how long are you planning to stay?
I have lived here for 2 years now, although I have spent 3 years in Germany. At the moment I have no immediate plans to move and with the forthcoming Brexit debacle, I aim to apply for dual nationality between the UK and Germany, in order to protect my British identity but also protect my rights as a European citizen.

Why did you move to Germany and what do you do?
Essentially my (now) Wife is to blame. We met in the UK where she was working for a large international company, soon after she was relocated to Amsterdam, whereupon I believed the relationship would be over. The trouble was, I liked her so I ditched my entire life in the UK, leaving with only clothes and renting out my flat for a new adventure in Amsterdam. (I would highly recommend it)

The same company saw us move to Germany where the lack of native language skill was far more of an issue than in the Netherlands. However, I did manage to land a job as a radio DJ in Wiesbaden with the American Forces Network. After my wife took a new job, we moved to Wiesbaden and have lived here ever since.

Currently, I am a writer, English as a second language teacher, an events DJ and I am currently in talks to create television and radio programs in English for German media organisations.

Did you bring family with you?
Half! I came with my wife and my Son lives in the UK with his mother, I get back whenever I can to see him.

My family have all had the opportunity to visit me in Germany and see how beautiful it is, Germany gets a bad rap in England, but it is a beautiful country filled with things to do and the people are marvellous for the most part!

How did you find the transition to living in a foreign country?
The move to Germany was the toughest because the area where we lived in Frankfurt was quite out the way, so I felt quite isolated. I learned a month of German when I first arrived before working with the American Forces Network and because my work was in English, my social circle also, it made it difficult to learn the language.

3 Years in and I am still not a good German speaker. Coming to Germany was fairly simple but I owe this largely to my German native wife, without her, I think the transition would have been a failure for me, honestly, she is the only reason I made it here. Whilst the German government offer a lot of help with finding work and insurances etc. it is nearly all in German, so without the language, you stand little chance of integration.

Was it easy making friends and meeting people; do you mainly socialise with other expats?
It is difficult to make friends with Germans I have found - you have to stick at it! and they do come around, for me I found it easier making friends with the Americans I met in the German community.

It doesn't mean Germans are unfriendly - far from it! They will almost always do their best to communicate with you in English, especially those under 40, it's just that they have few close friends and it is hard to break into that circle, especially without the language.

There are many ex-pat meet up groups though and they are REALLY active and good at making social events, it's almost impossible to ignore the sheer number of people and events happening in nearly every major city. 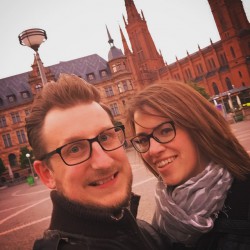 My Wife and I in our home city of Wiesbaden
What are the best things to do in the area; anything to recommend to future expats?
Lots - Germany has so many festivals and markets to visit, there is always something happening, get out and experience them for yourselves! The beautiful Christmas markets that are in almost every town and city are a must see.

Do what the Germans do - go to football matches, drink beer, walk in the mountains go to the sauna complexes and Schwimbadds, you will never be bored in Germany!

What do you enjoy most about living in Germany?
Beer.

But also the fact that there is always something happening, concerts, markets, festivals. Almost every weekend towns and cities come alive with parades and fun. The summer is the best time to be in Germany, the winters can be long and bleak, so make the most of the time between may and September!

How does the cost of living in Germany compare to home?
I find that food is comparable in pricing, but clothing appears to be a lot more expensive than in the UK. Beer and wine are MUCH cheaper though with a good bottle of wine setting you back no more than 5 euros.

Rents are cheaper here unless you live in a city centre, but health insurance is a lot more expensive than the UK, there is no NHS type system here, you need to have your own health insurance. Taxes are significantly higher. 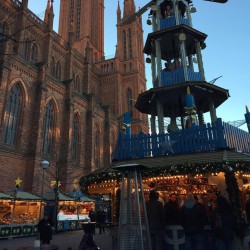 An example of the the beautiful Christmas Markets in Germany
What negatives, if any, are there to living in Germany?
It takes a little getting used to the German pace of life they seem to be a lot more focused on themselves and their own needs and this is evident in things like queues and whilst driving on the roads.

There are not many negatives to living in Germany, but costs of health care, insurance and taxes are a few.

If you could pick one piece of advice to anyone moving to Germany, what would it be?
Learn the language! but I think this is the most obvious piece of advice for an expat!

What has been the hardest aspect to your expat experience so far?
Not knowing any of the language before I arrived here. It meant I had some frustrating experiences doing routine things like taking a train, because I couldn't understand the announcements, or dreading doing menial tasks like sending a package home because you know for sure that you will be asked a question that you won't understand and have to nod politely and agree with whatever it is.

When you finally return home, how do you think you'll cope with repatriation?
I have no plans to return home yet, but if I did it will be strange. I feel I have grown so much as a person and have a new European outlook on life. When I left the UK I was a sales person and a trainer, now I am a broadcaster, leaving the UK gave me the opportunity to do things I never would have done back home, I learned to sing and joined a band, I grew a beard, I got my own radio show and so many other experiences.

So going home, I will be a different person to the one I am now for sure so it will take a while to readjust! Always something going in every town and city
What are your top 5 expat tips for anyone following in your footsteps? Tell us a bit about your own expat blog.
My blog is essentially a list of the things I notice about living in Germany. Whenever I spot a new quirk or something that is different to how it is in the UK, I write it down on my phone and then blog about it at a later date. It's a light-hearted look at the quirks and culture of Germany.

How can you be contacted for further advice to future expats coming to your area?
Go to my website www.paulthebrit.com

Paul is a British expat living in Germany. Blog description: The top 100 things you will notice when you move to Germany. Written by a British Ex-pat!