Want to get involved? Become a Featured Expat and take our interview.
Become a Local Expert and contribute articles.
Get in touch today!
Filed: Interviews,Germany
10 years ago, James swapped Englandâs postindustrial West Midlands for the beautiful German city of Wiesbaden. Some old habits die hard. Nutella and coffee will never replace a Sunday morning cup of tea and bacon sandwich. His local adopted Bundesliga team are FSV Mainz 05 because they play in red and white, so it was kind of destiny. He is both highly organised and hopelessly unpunctual at the same time, and can simultaneously think in English and German, which both thoroughly confuse the Germans. He is guilty of having a good moan from time to time about German inflexibility, but after a sunny Summer day cycling through the vineyards of the Rheingau (the home of some of the worldâs best Riesling!), all is forgiven and he admits that really he loves living here. James's expat blog is called Live Work Germany (see listing here) 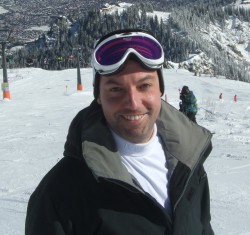 Here's the interview with James...

Where are you originally from?
see bio

In which country and city are you living now?
see bio

How long have you lived in Germany and how long are you planning to stay?
I moved here 10 years ago and currently have no plans to move on. Will I retire here? Probably not. Do I often think in Winter that living in Spain or South-East Asia would be pretty cool? Absolutely. But then Spring arrives, the wine festivals start, everyone cheers up and the world is great again. I have a house in Spain though...so one day...the temptation is always there! 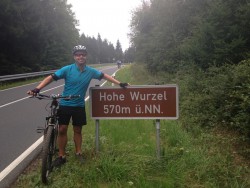 Mountain biking in the Taunus
Why did you move to Germany and what do you do?
I am a Strategic Procurement Manager for a multinational consumer goods company. Originally I moved here for a different job in the automotive sector, also in Procurement. Back when I made the decision to move here, all of my friends were at the point of getting married and having kids. That wasn't really part of my plan so I thought, what have I got to lose? I'll do it for 2 years and if I don't like it I can always move back. I never really looked back and could not really imagine living in the UK permanently again.

Did you bring family with you?
No, I moved here on my own. I was single at the time so that was not really a factor.

How did you find the transition to living in a foreign country?
I lived in Germany for a year as part of my studies so I was fairly well prepared for what to expect. The choice in the supermarkets had definitely improved in the time in between. Crisps flavours other than paprika and cheese which has some flavour were both very positive progressions.

Was it easy making friends and meeting people; do you mainly socialise with other expats?
My friends initially were all expats, and even now a lot still are. Once Facebook became popular, I joined and was an Admin for a FB group for expats in the city where I live. I could already speak the language so that wasnât an issue for me. Trying to make German friends was a challenge at first. Germans tend to have smaller but closer groups of friends and penetrating a tight-knit social circle can take time. I also find German lads' nights out a bit boring to be honest. Going for "a beer" literally means one!

What are the best things to do in the area; anything to recommend to future expats?
Where I live is wine country, so I love to get out at the weekend and go cycling through the vineyards of the Rheingau or along the river. There is also the forest and the Taunus hills for hiking and mountain biking. If you're into spas and wellness tourism, there are plenty of options too! Pretty much every weekend in Summer there is a wine festival in a different town or village outside of town.

What do you enjoy most about living in Germany?
Clean, safe cities, great beer and wine, Summer festivals where everyone gets drunk, has a good time but there are no idiots causing trouble, great hiking and cycling opportunities within easy reach of major cities, skiing in winter, seasonal produce, environmental awareness, Turkish supermarkets, being able to visit another country for the weekend without having to endure the yellow plastic of Ryanair. I've actually written a blog post on this...just saying!

How does the cost of living in Germany compare to home?
Everything is relative but I would say most everyday necessities are a little bit cheaper. Groceries and going out for meals and drinks at the weekend are cheaper. Local public transport is pretty reasonable. Property (both renting and buying) generally is cheaper, although it has risen in price sharply over the past few years and there is a big difference between major cities and rural areas. Along the Mosel in beautiful wine country you can still buy a house for less than â¬100,000! Any type of service which requires manual labour like hairdressers, mechanics, handymen etc is very expensive. Salaries here are around 20-25% higher for most jobs compared to the UK, although tax and social contributions are also significantly higher. I've written a blog post on this as well!

What negatives, if any, are there to living in Germany?
The stiffness of the workplace culture. Germans separate work and leisure time very distinctly and the workplace is much more formal than it is in the UK. Donât expect your boss to take you on a team night out! I do kind of get this and the see advantages of this approach in some respects in terms of respect for work/life balance. Nonetheless, I find it extremely strange that you would still address somebody formally as Herr X or Frau Y with whom you spend so much time.

German efficiency is also a complete myth. Yes, they are extremely efficient at making stuff but when it comes to anything to do with administration or bureaucracy, they are one of the most inefficient countries you could imagine. There is a saying that if you want to experience German efficiency, go to Switzerland.

If you could pick one piece of advice to anyone moving to Germany, what would it be?
Learn German! So many donât and I think every immigrant should learn the language of the host country. Expats are no different. Plenty of people less smart than you have managed it. âEveryone speaks English hereâ and âGerman is really hardâ are really just excuses for âI canât be bothered.â You should apply yourself and focus, and consider it one of your priorities that you need to find time in your schedule to do.

What has been the hardest aspect to your expat experience so far?
I struggle that Germans seem to be ingrained in the belief that their way is the right way and because something has been done the same way for 20 years, it must be correct. Thinking outside the box and questioning norms is something very alien to their culture. Case in point: Many Germans still pay for their monthly bank account and do all of their transactions in the bank branch, instead of opening an online account for free and transferring money by smartphone. "Groupthink" is very pervasive here, as can also be seen in journalism and politics. All of the main parties are pretty much saying the same thing on the major stuff that matters.

When you finally return home, how do you think you'll cope with repatriation?
I don't really see myself moving back to the UK. I just find the weather too depressing...it's like living somewhere where it is constantly April plus or minus a few Â°C. I love going back as a tourist and to see friends and family but I don't think I could live there permanently. I do miss how open and laid back people are though and the British sense of humour. It's also much easier to start a business there than it is here.

What are your top 5 expat tips for anyone following in your footsteps? Tell us a bit about your own expat blog.
I saw there was a gap on the web for an informal, light-hearted âhow toâ site explaining some of the nuances of life in Germany. There are a few more formal or generic sites out there but not much in a narrative style. Iâve lived here long enough and speak German fluently so I figured I could help people with this advice. Longer-term I would like to turn it into a business serving newcomers to Germany. I would love to connect with a female mom blogger in Germany to help with a few family-orientated posts. If anyone out there is interested, please get in touch!

How can you be contacted for further advice to future expats coming to your area?
Anyone can contact me by email at [email protected], on Facebook on https://www.facebook.com/liveworkgermany or Twitter @liveworkgermany
I do my best to respond to all messages!

James is a British expat living in Germany. Blog description: Your Expat Guide to Germany | Relocation | Life, Work, Travel, Tips and Guidance | Blog from over 10 Years' Experience of Life in Germany