Want to get involved? Become a Featured Expat and take our interview.
Become a Local Expert and contribute articles.
Get in touch today!
Filed: Interviews,Ireland
Colleen just realized that this past Thanksgiving was her 11th one spent outside the United States. She has been living in Ireland since 2005. She married a Kerryman in 2007, has two children and currently lives on the Dingle Peninsula. Her family plan to move back to Maine in 2015 and are excited and nervous about a new adventure. Colleen's expat blog is called A Mainer in the Maharees (see listing here) 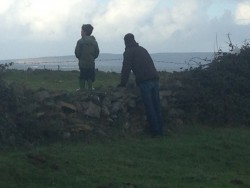 Where are you originally from?
I was born outside Boston but grew up in Maine in Cape Elizabeth. It's a beautiful small town on the ocean.

In which country and city are you living now?
I am about 2 hours from the closet city! I live in Kilshannig, Castlegregory, Co. Kerry in the south west of Ireland.

How long have you lived in Ireland and how long are you planning to stay?
We moved out here from Tralee, which is about 20 km away, over three years ago. We are planning on moving back to the US next year but will keep the house so we can come back at some point. 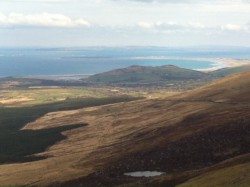 View of the Maharees from the Connor Pass
Why did you move to Ireland and what do you do?
My husband grew up out here. It is a beautiful sandy spit surrounded by sand dunes and ocean. There are seven small islands off the coast called the Maharees and so the area is known as the 'Maharees'. I worked for the local government based in Tralee, running a community regeneration programme but left after having my second child. I now hang out on the beach with my two children and manage a small holiday property.

Did you bring family with you?
I was single when I first left the US and lived in New Zealand. I moved to Ireland by myself as well.

Was it easy making friends and meeting people; do you mainly socialise with other expats?
I traveled to New Zealand with a boyfriend and that probably made it a little more difficult to meet people as we were together all the time. Hostels and backpackers are a great way for some people to make friends but I found them a little bit intimidating. Work has always been the easiest way for me to meet people. 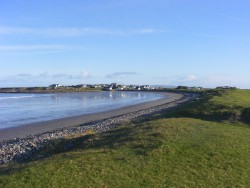 Kilshannig in the distance
What are the best things to do in the area; anything to recommend to future expats?
There is plenty of tourist information online about the Dingle Peninsula and traveling around Ireland is very easy. We are in a remote spot and water sports are very popular as well as hiking.

What do you enjoy most about living in Ireland?
I love the peace and quiet and relaxed lifestyle. It's not that different from Maine in some ways but the beaches are completely empty most of the time and the coast line is much more accessible because no one can restrict access to the beach.

How does the cost of living in Ireland compare to home?
It's cheaper to live here but Ireland on the whole is an expensive place to live and there is certainly not a lot of earning potential in rural Kerry.

Beatiful beach west of Dingle
What negatives, if any, are there to living in Ireland?
The basic public services are not great and the healthcare system (while very affordable) is a bit dodgy.

If you could pick one piece of advice to anyone moving to Ireland, what would it be?
Irish people are very friendly but it can take a while to really get to know them and they are not as forthcoming as Americans so try not to take it personally if it takes a while to be accepted into a small community.My advice is to take your time with people and have a sense of humor!

What has been the hardest aspect to your expat experience so far?
The hardest part has been having two children and being really on my own with no family or close friends with young children. It's very difficult working and taking care of babies with no network to help you along the way.

When you finally return home, how do you think you'll cope with repatriation?
I think it will be a big readjustment. There are little things in the culture and attitude that I think will be hard to get used to again. It feels at times like people compete to see who's busier in the States and everyone is so focused on labeling people by profession or class. No one here ever asks "What do you do?" straight after meeting you and you could spend all night talking to someone in the pub without it ever being asked. 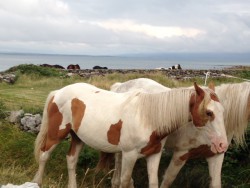 Horses coming to visit
What are your top 5 expat tips for anyone following in your footsteps? Tell us a bit about your own expat blog.
I have been writing stories on and off for years and decided (again) to try and get in the habit of writing regularly and it made sense to write about living in Ireland.

How can you be contacted for further advice to future expats coming to your area?
I can be contacted through my blog 'A Mainer in the Maharees' by anyone looking for information or advice about living in Ireland.