Want to get involved? Become a Featured Expat and take our interview.
Become a Local Expert and contribute articles.
Get in touch today!
Filed: Interviews,England
Kim is an american who came to England with the United States Air Force and stayed for love. She met her English husband and now lives outside of Cambridge. She writes about all aspects of living in England from history, days out, etiquette and much more. Kim's expat blog is called American To Britain (see listing here) 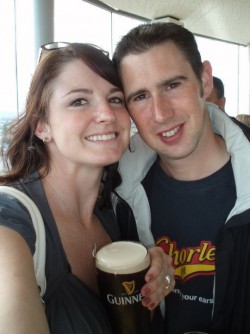 Here's the interview with Kim...

Where are you originally from?
I am from Denver, Colorado but have also lived in Minot, North Dakota and Osan AB, South Korea.

In which country and city are you living now?
I live in a village called Histon, right outside of Cambridge, England.

How long have you lived in England and how long are you planning to stay?
I have been living here for a total of 8 years. Three of them while I was in the USAF and five of them as a civilian. I think I will spend the rest of my life here. 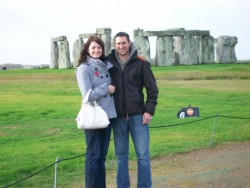 Stonehenge
Why did you move to England and what do you do?
Itâs a bit of a long story but the long and short of it is that I was in the United States Air Force. I lived in South Korea for a year before coming to England. I was deployed here in May 2003, in support of Operation Iraqi Freedom and then tried to get a permanent assignment here. While I was stationed here, I met my husband and decided that I wanted live here on a more permanent basis. I work as an administrator.

Did you bring family with you?
No but I met my husband here.

How did you find the transition to living in a foreign country?
It was tough for me especially when I went from the transition from being in the military to a civilian in a foreign country. I no longer had the sense of security that the military gives you and had to learn things about England in a different way because many rules did not apply to me while I was stationed here. For instance, we did not have to pay council tax. Also I had to find work and in the military I worked on the aircrew's survival equipment, not a lot of jobs in that line of work on the outside!

Was it easy making friends and meeting people; do you mainly socialise with other expats?
It was hard to make friends so I stuck to what I was interested in. I like to run and walk long distances so I met people doing these activities.

I would say I only really socialise with other expats via Facebook and other networking sites. I am not sure if this is different for me because my husband is English.

Hadrians Wall
What are the best things to do in the area; anything to recommend to future expats?
I love Cambridge, there is so much history that is available all around- it inspired me to do Bachelors in history. If you come to Cambridge, you MUST see:
Kings College Chapel- It is visited more than Westminster Abbey and is the largest fan-vault ceiling in England. It also still has the initials of Henry VIII and Anne Boleyn in the wooden screen.
The Round Church- It is one of only four round churches based on The Church of the Holy Sepulchre in Jerusalem.
The Eagle Pub- You must go into the RAF bar and see the names of the US pilots from WW2 on the ceiling.
I personally think that in order to appreciate this city, you just have to have a wander. If you do go for a punt, make sure you haggle on the price!

What do you enjoy most about living in England?
I feel like I am more exposed to new ideas here so I am learning all of the time.

How does the cost of living in England compare to home?
It is very expensive here in some ways and not in others. For instance a lot of museums are free. I think you just have to be a bit more conscience about how you spend and there are ways to have fun for free! 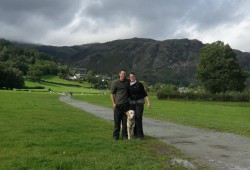 Lake District
What negatives, if any, are there to living in England?
Living so far from my family and friends

If you could pick one piece of advice to anyone moving to England, what would it be?
Have an open mind. Its not the United States and that is a good thing for many reasons. Enjoy it!

What has been the hardest aspect to your expat experience so far?
Finding a job. Until you have an Indefinite Leave to Remain, the job hunt is hard. That is because if you are not an EU or UK citizen, they have to make a case on why you are more suited for a job. 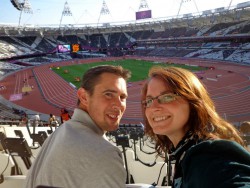 London Olympics 2014
What are your top 5 expat tips for anyone following in your footsteps? Tell us a bit about your own expat blog.
I like to write about everything, places to go, why things are the way that they are, historical events, cultural issues and ways to save money. I try to save others from making the same mistakes that I have so that they can enjoy their time here as much as possible. It is written towards the American military that are here but I think a lot of other people will find my information useful.

How can you be contacted for further advice to future expats coming to your area?
I can be contacted via email, Twitter, Facebook, or my website.

Kim is an American expat living in England. Blog description: I have lived in England for more than 8 years. While I was stationed at RAF Mildenhall, I met my English husband and decided to make England my permanent home.