Want to get involved? Become a Featured Expat and take our interview.
Become a Local Expert and contribute articles.
Get in touch today!
Filed: Interviews,England
Ellen Hawley is an American living in Cornwall. She is a fiction writer and blogger and has worked as an editor, a teacher of creative writing, a cab driver, a waitress, an assembler, a janitor, a file clerk, and for four panicky hours a receptionist. Her blog is at http://notesfromtheuk.com. Her novels are The Divorce Diet (available as of December 30, 2014), Open Line (2008), and Trip Sheets (1998). Ellen's expat blog is called Notes from the UK (see listing here) 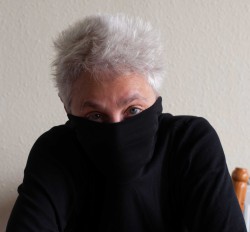 Here's the interview with Ellen...

Where are you originally from?
I was born and raised in New York City and lived in Minnesota for many long, cold winters.

In which country and city are you living now?
The U.K.--more specifically on the north coast of Cornwall, in the country.

How long have you lived in England and how long are you planning to stay?
I've lived here for eight years and hope to stay. 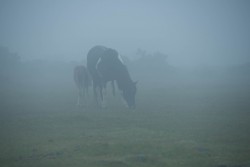 Wild ponies on the moor, in the fog
Why did you move to England and what do you do?
My partner and I are retired and were accepted into the U.K. under the Artists and Writers visa category. At the time, that led to indefinite leave to remain, although it no longer does. So we were lucky enough to be able to move here because we loved it.

I said we're retired, but really what that means is that we retired from any normal sort of job. I write more than I could when I was working.

How did you find the transition to living in a foreign country?
A friend who'd moved from Britain to Australia warned us that the first year was the hardest, and it helped to know that.

Was it easy making friends and meeting people; do you mainly socialise with other expats?
Most of our friends are British. A few other Americans live in the village, but I can't say we're closer than we'd otherwise be, given our temperaments, just because of a shared nationality.

Stannon stone circle
What are the best things to do in the area; anything to recommend to future expats?
Anyone who loves hiking, surfing, swimming, or landscape will love it here.

What do you enjoy most about living in England?
The place still knocks me out. And people have been wonderful and accepting, even though we fit in as neatly as two left shoes.

How does the cost of living in England compare to home?
The cost of living is higher. That said, however, the National Health System covers everyone, including us, and health insurance was a major expense, and a major worry, in the U.S. I haven't done a direct comparison, and I'm terrible with anything involving numbers, but I think car insurance is less here--probably because health care is structured differently.

What negatives, if any, are there to living in England?
For us, very few. Distance from family and friends. Distance from the culture we grew up in. For anyone needing to find work, though, and unable to work online, this is a tough place.

If you could pick one piece of advice to anyone moving to England, what would it be?
Keep an open mind. Don't think you're better than anyone else, or that your ways are better.

What has been the hardest aspect to your expat experience so far?
The visa regulations changed after we moved here and we had to fight to get the right to stay. It was hard and it was expensive, but the village supported us in many ways, including writing letters and signing a petition and simply wishing us luck, and that made a huge difference.

When you finally return home, how do you think you'll cope with repatriation?


What are your top 5 expat tips for anyone following in your footsteps? Tell us a bit about your own expat blog.
Notes from the U.K. is about the absurdities of living, as an American, in a Cornish village. I don't take it too seriously and I hope you won't, but do stop by and have a read. We all need a laugh sometimes.

How can you be contacted for further advice to future expats coming to your area?
Through the blog or Twitter.

Ellen is an American expat living in England. Blog description: Exploring the spidery corners of a culture and the weird stuff that tourist brochures ignore. (by Ellen Hawley)