Want to get involved? Become a Featured Expat and take our interview.
Become a Local Expert and contribute articles.
Get in touch today!
Filed: Interviews,Finland
Michele is a late bloomer, getting (re)married at 50, and moving halfway across the globe to join her new husband in Finland! She's got three grown girls back in the States, and she's just waiting to bring her dog over in December so that they can go adventuring together. She keeps a diary-type of blog of her adventures at finlandadventures.wordpress.com Michele's expat blog is called finlandadventures (see listing here)

Here's the interview with Michele...

Where are you originally from?
I was born in Ft. Worth, Texas, a fifth-generation Texan. However, I am an Army brat, so I've barely lived there. I spent the last 15 years living just outside of New Orleans, Louisiana, so I more strongly identify with that area.

In which country and city are you living now?
Helsinki, Finland

How long have you lived in Finland and how long are you planning to stay?
I've only been here a couple of months, so far. Plans are to stay here permanently, or until the husband gets relocated somewhere else.

Bridge to the world's only zoo on an island
Why did you move to Finland and what do you do?
I got married in June to a Finn. I had to return back home to Louisiana to settle everything, as we had thought he might be coming to the States. Those plans didn't pan out, so I picked up and moved to Finland!

Did you bring family with you?
No, it was just me. I am bringing my dog, Shiva, back with me in December.

How did you find the transition to living in a foreign country?
Having been an Army brat as a child, I find moving to a new country rather exciting. However, being an older person...change is a bit harder in some ways, although it doesn't stress me out like it might if I were much younger.

Was it easy making friends and meeting people; do you mainly socialise with other expats?
I've met lots of people, but I haven't had much time to form any bonds. Despite the popular notion that Finns are stand-offish, nearly all that I have met have been quite friendly and eager to talk. 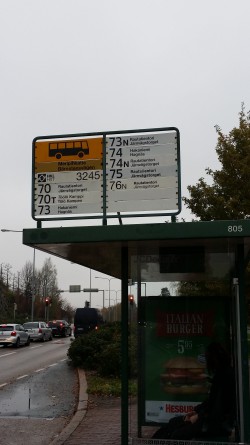 What the bus stop looks like
What are the best things to do in the area; anything to recommend to future expats?
The public transportation is amazing! I don't really have anything to compare it to, but it's great. The zoo is small, but worth an afternoon to stroll around. Definitely take the time to go check out the markets, and the Forums mall, if you're a shopper.

What do you enjoy most about living in Finland?
I'll say it again -- the public transportation. Coming from a city that simply did not have any public transportation, and was not pedestrian or bike friendly, I am constantly amazed at how well people get around. Sure, there are cars, but the majority of people do not drive, and have no need to, really. I love riding the bus and exploring the city without having to worry about finding parking.

How does the cost of living in Finland compare to home?
I come from an area of the South that is relatively high-priced, so most things are comparable. However, I do notice that gasoline is really high, making me glad I don't need a car here. Also, eating out is a huge expense and not really a great deal. Back home, dinner out for two could be had for around $30, the food was tasty AND you took home leftovers. Here, you will pay nearly twice that, get half the food, and the taste is so-so. I'm cooking at home a lot more than I used to.

What your Finnish ID card will look like (but with your picture, of course)
What negatives, if any, are there to living in Finland?
Probably the cost of eating out. I used to eat out a lot back home, it was the social thing to do, and it didn't really cost that much. Here, not so much. I haven't been here long enough to complain about the snow. Check with me in a few months!

If you could pick one piece of advice to anyone moving to Finland, what would it be?
Get your paperwork started early. There are a lot of steps to getting settled, paperwork-wise, and you'll get some conflicting information, depending on who you talk to. If you can start any of it before you leave home, do so. But then again, red tape is not exclusive to Finland.

What has been the hardest aspect to your expat experience so far?
The language. I really want to learn Finnish, but it is such a god-awful difficult language to learn! Even the Finns say that it is. Fortunately, a lot of people speak English, so it's not exactly a necessity, but it would be helpful.

When you finally return home, how do you think you'll cope with repatriation?
I'll miss the public transportation, I'm sure. The few places in the U.S. that have an efficient system are places that I likely will NOT end up, so going back to the expense of car, and having to drive where ever I want to go will be something to get used to. I like being green.

View of the Finnish language class
What are your top 5 expat tips for anyone following in your footsteps? Tell us a bit about your own expat blog.
It's told in a conversational style. I pretty much started it to be a diary of my preparation for moving, as well as a way to keep friends and family back home up to date. I've managed to pool together some good information on getting a dog here, as well as what steps are necessary for getting through all the red tape. Check it out at finlandadventures.wordpress.com I also use twitter and tend to hashtag everything as #finlandadventures :)

How can you be contacted for further advice to future expats coming to your area?
You can find me on Facebook (Michele Richardson Pelkonen) or email me through my blog. Good luck on your move!

Michele is an American expat living in Finland. Blog description: The life of a Louisiana Expat in the cold, cold North