Want to get involved? Become a Featured Expat and take our interview.
Become a Local Expert and contribute articles.
Get in touch today!
Filed: Interviews,Switzerland
Margaret is an American who fell in love with a Peruvian man and ended up following him to Zurich, Switzerland, where she now does her best to make a home. Her background is in research science, but in Switzerland she now spends her time teaching English, crafting, writing, and baking. Margaret's expat blog is called Destination: Macaron (see listing here) 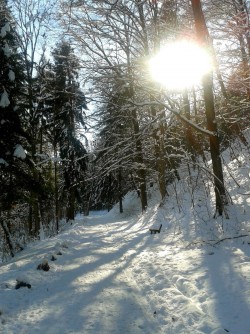 The Uetliberg on a bright winter day.

Here's the interview with Margaret...

Where are you originally from?
I grew up in the mountains of rural West Virginia, although I can't claim true native status, since I moved there with my family when I was 4. I moved to Massachusetts for college and then east to Boston for 10 years following graduation, so (for European purposes) I usually claim Boston as my hometown.

In which country and city are you living now?
Currently I'm living in Zurich, Switzerland. I moved here in January, 2013, less than a month after defending my Ph.D. in biomedical research at Harvard University.

How long have you lived in Switzerland and how long are you planning to stay?
I've been in Switzerland for 19 months and - unless something unforeseen happens - it was a one-way move, so I am here permanently. Scary thought! 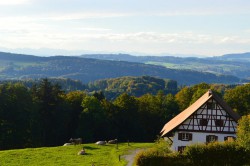 Swiss countryside, complete with cows.
Why did you move to Switzerland and what do you do?
I moved to join my husband, who has lived in Switzerland since he was 14 (he's originally from Peru). Currently I work part-time wherever I can find jobs - I teach English classes in general conversation as well as science communication, and I am also in the process of writing an expat guide for Zurich for www.expat-living.info.

Did you bring family with you?
My husband was already in Zurich working, so I moved to join him, but didn't bring anybody else with me.

How did you find the transition to living in a foreign country?
I'd lived in France for 8 months several years ago, so I wasn't expecting the transition to be as difficult as I found it. I know that every country has its unique challenges - and in German-speaking Switzerland, it's definitely the language.
I didn't speak any German when I moved here, but even now after taking several classes, I find it challenging to communicate. Swiss German has no 'official' grammar rules and is solely oral, which makes it very hard to meet people and make friends with the locals. It was also hard because I came over and had no social network to tap into - my husband had only been in Zurich for a year longer than me, so he only knew his work colleagues (and only on a professional level).

Was it easy making friends and meeting people; do you mainly socialise with other expats?
I've heard that the best way to meet locals is to have children or a dog - neither of which I've acquired (yet).
I worked hard at getting out and attending several groups around the city, as I found that many people were polite but reserved, so it was hard to make personal connections. Unfortunately, the language barrier has prevented me from getting to know many Swiss (although I have made a couple lovely Swiss friends who are more than willing to speak English with me or help me with my rudimentary German). My network is mainly expats, but not overwhelmingly American - I like the diversity! 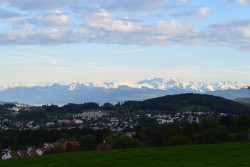 The view from the hill in our backyard.
What are the best things to do in the area; anything to recommend to future expats?
Zurich is a lovely city, and I definitely recommend hitting the lake on a sunny day, but perhaps the best thing to do is to get out of the city!
You don't need to be super fit to enjoy hiking the Alps or exploring the countryside - take advantage of the amazing public transportation and use trains or cable cars to reach the many gorgeous views of the mountains and lakes, then take some leisurely hikes.

What do you enjoy most about living in Switzerland?
So many things! Switzerland is unbelievably gorgeous and the public transportation is extensive, efficient, and reliable (no car? no problem!). The pace of life is somewhat slower compared to the US, which I like. The country as a whole is safe, and I love the amount of independence the Swiss foster in their children, even at a very young age. I look forward to doing the same to any future children I may have.

How does the cost of living in Switzerland compare to home?
The cost of living in Zurich is much higher than anywhere I've lived, including Boston, where I moved from. I spent months dealing with sticker shock everywhere - the grocery store, furnishing our apartment (yes, even Ikea!), rental costs, restaurants, etc. But salaries are usually higher as well, and the quality of life is so high that it evens out, in my opinion. 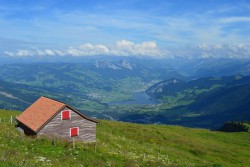 Hiking on Mt. Rigi
What negatives, if any, are there to living in Switzerland?
The Swiss are very polite and helpful, but extremely reserved. They take a long time to 'warm up' - and not speaking Swiss German immediately pegs you as an "outsider." That can be hard and feels like a big barrier to integration.

If you could pick one piece of advice to anyone moving to Switzerland, what would it be?
Be patient. Something that I've struggled with! Trying to rush and be in a hurry to settle in, make friends, learn the language - it will just add stress. Everything here works really well, as long as you accept that it takes the amount of time it takes. Trying to insist on making things happen faster will often just delay (and I'm talking anything from furniture deliveries to residence permits).

What has been the hardest aspect to your expat experience so far?
Making a network of friends and people I feel I can call up for a chat or coffee. I'm usually not terribly forward, and I've had to change that, otherwise I miss out on opportunities to make friends.

When you finally return home, how do you think you'll cope with repatriation?
Currently I have no plans to repatriate, but I think if I did, I'd struggle to retain the things I like about Switzerland - the mutual respect of others, the lack of consumer culture, the slower pace of life. Plus, my husband has never lived in the US, so I'd have to cope with his culture shock! 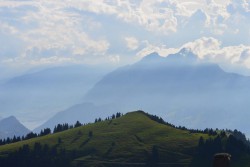 Swiss Alps
What are your top 5 expat tips for anyone following in your footsteps? Tell us a bit about your own expat blog.
Destination: macaron, my blog, chronicles my adventures in Switzerland and as half of a multicultural marriage, whatever forms that might take. I enjoy crafting and baking, so those often show up in my posts, but usually I just try to write lighthearted, humorous tales about the travels, tribulations, and triumphs of my life in Zurich.

How can you be contacted for further advice to future expats coming to your area?
Twitter or just leave a message on my blog - I'm always happy to hear from others!

Margaret is an American expat living in Switzerland. Blog description: An American reformed biomedical PhD moves to Zurich, Switzerland to join her Spanish-speaking husband. She bakes, she crafts, she tries to speak German; she doesn't do science.