Want to get involved? Become a Featured Expat and take our interview.
Become a Local Expert and contribute articles.
Get in touch today!
Filed: Interviews,Italy
Angela thought she was only going to live in Italy for a few months to learn Italian, 6 years later and she is raising a feisty red-headed toddler and working from home for a luxury belt brand based out of Modena in the mid-North! She blogs about all of the reasons that moms have to dress up, get out and be seen in Italy, where style, fashion and motherhood go hand in hand. She features other Italian mom\'s in her street style section, fun events in Modena that are perfect for families traveling to the area and ways to shop and look stylish on a budget. Angela's expat blog is called Reasons to Dress (see listing here) 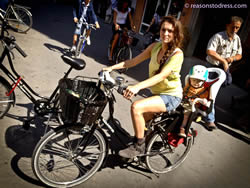 Here's the interview with Angela...

Where are you originally from?
I am from Ontario, Canada. I grew up in the suburbs and then moved to Toronto when I was 18. After 10 years I decided to move to Italy.

In which country and city are you living now?
I live in Modena, which is in the mid-North of Italy close to Bologna in the Emilia Romagna region.

How long have you lived in Italy and how long are you planning to stay?
I have been living in Modena for about 4 years. When I first moved to Italy I lived in Milan and then moved to Bologna, but neither had what I was looking for. It's difficult to say how long I'll stay here. The Italian economy is so scary that, I think the whole country lives on the edge of leaving at any moment. But let's say that I want my son to go to high school in Modena (he's not quite two yet), because I think that this is a great place to grow up.

Why did you move to Italy and what do you do?
My parents are Italian immigrants but they never spoke Italian with us so I never learned to speak the language as a kid. At first I thought I would stay in Milan (the easiest city for non-Italian speakers to move to since EVERYONE speaks English) for 4 months. Instead of going back to Canada I moved in with my boyfriend and we work together for an artisan belt company. He loves living here and eventually convinced me to stay. 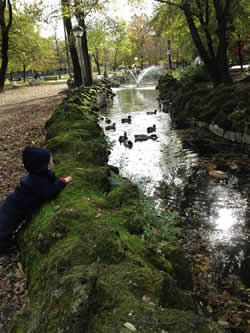 A Beautiful Fall Day in the Giardini Estense Gardens of Modena perfect for a stroll with a toddler
Did you bring family with you?
Nope, I came all by myself, it was December 12th, two weeks before Christmas. When I left there was a huge snowstorm in Toronto and I almost missed my flight. In fact I spent Christmas day all by myself that first year in Italy, while on the other side of the ocean my family of 20 people were celebrating together.

How did you find the transition to living in a foreign country?
The first few years were not easy. When you are learning a new language you can't express the nuances of your character by cracking jokes, being sarcastic or being subtle. In many ways communication becomes essential, primitive and basic. I also find that people thought I was dumb because my language skills in Italian were so poor. I suffered reverse racism in many ways which was a completely different experience than anything I had previously felt.

I thought about all of the new immigrants in Canada, and every encounter I had had with someone who just couldn't express their need, thoughts or feelings in English, and it was a humbling and enlightening experience.

Was it easy making friends and meeting people; do you mainly socialise with other expats?
I'm a social butterfly so I meet a lot of people. I wouldn't exactly call everyone "friends". There aren't many native English speakers in this part of Italy so I am pretty novel. Also, English is a desired language so a lot of people want to chat with me in English so they can practice, and you wouldn't believe the number of times people have asked me to be their kids' babysitter!

But yes, I have friends, real friends, non of whom are native English speakers but most of whom know English pretty well. We almost always communicate in Italian but every now and then I'll crack a joke in English and someone always gets it! 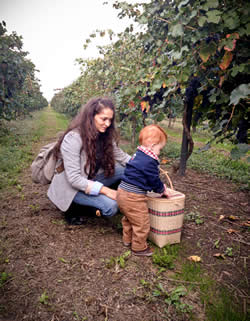 Grape picking with my toddler in the Modena countryside
What are the best things to do in the area; anything to recommend to future expats?
Modena is a beautiful town and a weekend here is perfect. There are fantastic exhibits in the museum, a beautiful garden for a walk with kids and in September there is the Philosophy Festival, one of the only festivals of its kind in Europe. The Piazza, Duomo and Tower in the city centre are all UNESCO World Heritage sites. This is the hometown of Enzo Ferrari, and a new super high tech museum just opened where his home was. Plus, we're close to Maranello, which is home to the Ferrari Museum! I also highly recommend traveling with the train to Bologna which is only a 15 minute train ride away.

What do you enjoy most about living in Italy?
Aside from the food? This part of Italy is known for it's lasagna, tortellini, tortelloni, tigelle and parmigiano reggiano cheese, if those aren't reasons enough I don't know what is! Oh wait, perhaps it is the weather. Compared to the frigid Canadian winters I have lived through, winter here is a breeze.

I love living in the city centre and I love the whole culture that surrounds Italian socializing, like "la passeggiata" - the walk, "l'aperitivo" - the pre-dinner drink and "la compania" - your group of friends that meet regularly. Modena is also filled with free events for families, most of the museums are free and every weekend there is something happening in the Piazza.

How does the cost of living in Italy compare to Canada?
Hard to say. I make much less in Italy than I did in Canada, however, I feel richer. Rent is not as much, and credit cards don't exist so everyone lives with cash. No one spends their money on frivolous things and there is a general understanding, even amongst friends, that no social gatherings should cost much. I manage to save here, whereas in Toronto I could never seem to put away money. 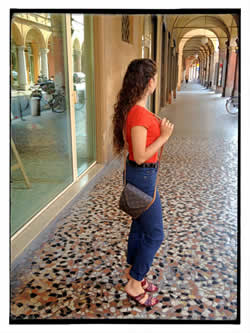 Under the porticos of Modena
What negatives, if any, are there to living here?
I lived through my first, second AND third earthquakes last year. In Toronto I don't think I have ever felt an earthquake, or at lest not a noticeable one. Obviously Italian politics, the economy and the job market are all a little lack luster, but no one really dwells on them.

If you could pick one piece of advice to anyone moving here, what would it be?
Learn Italian well and fast. There are free classes held by the city so there is no excuse for not learning Italian. I think it is weird, when I meet other English speakers who have lived here for years who still can't carry on a simple conversation. Italian is not that difficult and to fully enjoy your experience you need the language.

What has been the hardest aspect to your expat experience so far?
Canada is far, and it is expensive to go back. I have a toddler and sometimes it is really hard to accept the fact that he is far from my family, and will most likely see them less than once a year.

When you finally return home, how do you think you'll cope with repatriation?
I often think about that. There are huge differences in the lifestyle between Italy and Canada in general. At first I longed for things like shopping malls and big box stores, and large parking lots, central air conditioning and a dryer for my clothes! Now, when I go back to Canada all of these things seem so unnecessary and wasteful. I now hate big grocery stores and only shop in the local market. I can drive standard and I think automatic cars are a huge waste of gas. I've lived through summers where there was 40+ degrees EVERY DAY in Italy and now, when I go to Canada and they have the air conditioning full blast when it is only 25 degrees outside I think, "it's not even hot outside".

I miss the diversity of Toronto from people to food to experiences, but if I were to move back I would miss the simple things of living in Modena. No one tries to prove anything, and the experiences, the people the conversations are authentic. There is so much tradition here, that even if the details of daily life change and become modern there is a cultural base that acts as a foundation. Living here, I feel stable. 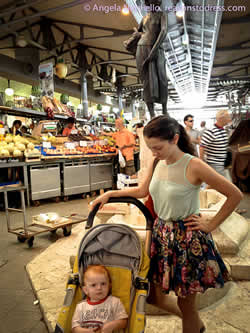 Grocery shopping in the covered market of Modena "Mercato Albinelli_"
What are your top 5 expat tips for anyone following in your footsteps?

Tell us a bit about your own expat blog.
My blog (see link below) is about my own experience as a work at home mom raising a toddler. I work in fashion, and I thought that staying at home to raise my son while working from home would mean I would no longer have any reasons to dress up and be seen and socialize.

The truth is quite the opposite. Modena is filled with events, outings and aperitivi and I can bring my son everywhere with me! This is completely different than in North America, where once you have kids your social life dies. Here, people bring their kids with them everywhere, and it is perfectly normal.

I also talk about working in the fashion industry, specifically for a luxury artisan brand, which is a type of work that doesn't really exist in Canada. I love giving fashion tips also on how to spend as little as possible (remember in Italy we don't make much money) to get the most bang for your buck.

I also have a street style section where I feature photographs of stylish mothers that I see around. Italian moms are the epitome of femininity, they wear 4 inch heels just to go grocery shopping and would NEVER be caught out of the house in yoga pants.

Angela is a Canadian expat living in Italy. Blog description: I thought I was just going to stay in Milan for a few months to learn Italian. It's been 6 years. Now I workathome for a luxury belt brand, I married my Italian lover and I'm raising our bilingual baby all while finding reasons to dress