Want to get involved? Become a Featured Expat and take our interview.
Become a Local Expert and contribute articles.
Get in touch today!
Filed: Interviews,England
Jaime was raised in a small town near the Puget Sound in Washington state and moved to London nearly seven years ago to pursue her dream of working in book publishing and living abroad. Her blog, Angloyankophile, highlights the highs and lows of living abroad as an American with a generous dash of humor. She also frequently reviews London-based restaurants, concerts, dance and theater performances appear as well. Jaime's expat blog is called Angloyankophile (see listing here) 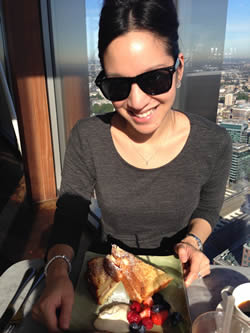 Here's the interview with Jaime...

Where are you originally from?
A small town near the Puget Sound, in Washington state.

In which country and city are you living now?
London, England.

How long have you lived in England and how long are you planning to stay?
I've been here for nearly 7 years and plan to stay until I get bored, which doesn't seem to be happening any time soon!

Why did you move to London and what do you do?
I initially studied abroad at The University of Oxford and returned for graduate school at The University of York a couple of years later. I decided to ride out the last few months of my student visa and ended up getting a paid internship in publishing. The rest is history, and I've been working in the book publishing industry ever since.

Did you bring family with you?
Nope, just myself, but my then-boyfriend, now-husband, was already living here at the time. A view from the top of the Shard - the highest building in the EU.
How did you find the transition to living in a foreign country?
The strange thing about living in the UK is that it's different, but not so different to the US that you experience major culture shock. The culture shock develops slowly over time but I'm now more adjusted to living a European lifestyle than an American one! Now the culture shock occurs when I go back to the States for a visit.

Was it easy making friends and meeting people; do you mainly socialise with other expats?
In short? No. Absolutely not, it wasn't easy. In fact, it was awful and took a long, long time to establish my friend-base. I gritted my teeth and forced myself to go on "friend dates" with other ex-pats or people I'd just met. The Americans were keen, the British - not so much. My friendships with British people developed over time. I joined a gym and started going to regular yoga classes, where I met two of my best friends. As I played the violin to quite a high level in high school and college, I joined The Royal Orchestral Society, where we perform three times per year at St. John's Smith Square in Central London. I feel very lucky to have a close circle of friends now, comprised of expats and non-expats alike.

What are the best things to do in London; anything to recommend to future expats?
London is a fantastic city to simply wander. I love the markets here so much. Whether you're looking for a gift, wanting to try different foods or just browsing, they have a lot to offer and give you a great flavor of the city. I'm also spoiled by the classical music venues here. World famous musicians frequently perform in London and tickets are so cheap compared to the States. I've attended concerts for only Â£10 at major venues like the Barbican and Royal Festival Hall.

What do you enjoy most about living in London, England?
I love the vibrancy of the city. There are so many different corners to be experienced and it's always moving, changing, growing, breathing. London feels alive. It makes me feel alive!

How does the cost of living in London compare to the US
Well, let's put it this way: when my husband and I were house hunting this summer, we found out that for what we could afford to buy in London (2 bedroom flat in central London or 3 bedroom house outside central London), we could purchase a 4-bedroom house with its own airplane hanger in the Puget Sound. Food for thought. 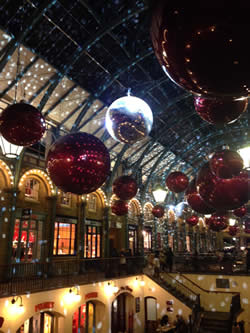 Covent Garden in Christmas mode.
What negatives, if any, are there to living here?
The UK is generally less convenient than the States. We have so many modern luxuries in the US to make life simpler that just aren't as readily available here. I've learned to adjust and live with that, but sometimes it just makes me want to tear my hair out! There is also less choice: in grocery stores, in restaurants, and with other services. Again, I've adapted to this, but whenever I'm in the US, it feels like the possibilities are endless! I can stare at the cereal aisle for about 20 minutes, feeling overwhelmed and happy with all the choices.

If you could pick one piece of advice to anyone moving here, what would it be?
Be patient. Be wide-eyed. That's two pieces of advice. You have to be open to accepting new experiences or that your experience won't match up to what you thought it would be - and be okay with that. Loving London takes time, and you'll only love it if you open your heart to it fully. Sorry if that sounds too New Age.

What has been the hardest aspect to your expat experience so far?
When I had to have surgery at an NHS hospital and I had no idea what to expect and my family was thousands of miles away. Anything medical scares me but when you're not in your home country, you just don't know what the protocol is or what you're entitled to. Luckily, I had the best treatment ever and a really terrific experience.

When you finally return home, how do you think you'll cope with repatriation?
I don't think I'll be able to! I experience culture shock even when I go back to the States now. I'll have to get used to people being more direct, saying what they mean, and chatting up a storm. I guess the same rules apply: I'll have to be patient. 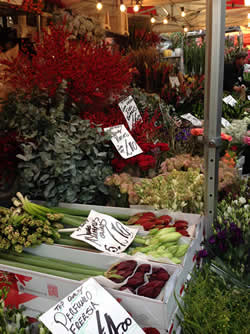 Columbia Road Flower Market - one of my favorite markets in London for all seasons.
What are your top 5 expat tips for anyone following in your footsteps?

Tell us a bit about your own expat blog.
My blog is a collection of my experiences in and around London. I'll write frivolous "tube rants", for example, about the obnoxious (but common) behavior of commuters on the London subway system. But I also write about deeper stuff surrounding issues such as identity, culture, and relationships. I like to think of it as a place where the best and the worst of UK and Stateside living are equally highlighted and celebrated.

How can you be contacted for further advice to future expats coming to your area?
You can reach me on Twitter or via my blog (see links below)

Jaime is an American expat living in England. Blog description: An American in London.