Want to get involved? Become a Featured Expat and take our interview.
Become a Local Expert and contribute articles.
Get in touch today!
Filed: Interviews,England
Robin Reetz, a fashion writer and editor living in London, moved to the UK from New York after a three-year long distance relationship. Robin and her husband now live in a second floor flat in east London, where she works as a Digital Editor and writer. Robin's expat blog is called Second Floor Flat (see listing here) 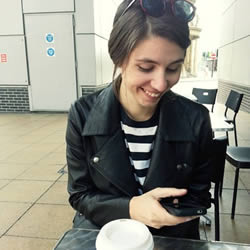 Here's the interview with Robin...

Where are you originally from?
The U.S. - I'm from Atlanta, Georgia originally but spent five years in New York before moving to London.

In which country and city are you living now?
England

Why did you move to England and what do you do?
I was in a long distance relationship for three years - my now husband was in London, and I was in New York and was ready for a change, so I made the move to the UK. I work in fashion as a writer and editor. 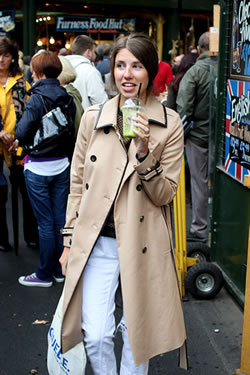 Borough Market, Robin's favorite place in London, Borough Market, is known for its weekend food markets. Highly recommended for anyone visiting or living in London.
How did you find the transition to living in a foreign country?
The transition to another country was much more difficult than I imagined. Since I had moved from home to the "big city" once before, I figured that a New York to London transition would be nothing - they're both big cities who are similar in a lot of ways and of course there's no language barrier or anything like that. What I didn't account for was the cultural differences that may seem small at first but can end up really affecting you.

What are the best things to do in the area; anything to recommend to future expats?
Expect for the transition to be difficult, but be as open-minded as you can. You're having an amazing experience that not a lot of people get to have, so make the most of it!

What do you enjoy most about living in England?
The ease of travel! Especially coming to London from the U.S., it's so wonderful to live in an area where it's easy and affordable to travel to other countries - I love being so close to Europe. Plus, my husband is a photographer so our travels are well documented. 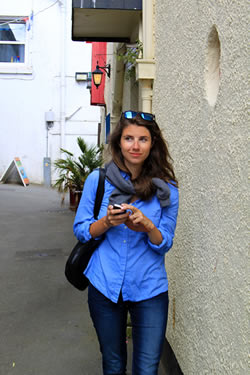 On holiday in Devon, England
How does the cost of living in London compare to New York?
Coming from New York, London is about the same if not a bit cheaper.

What negatives, if any, are there to living here?
For me, it's just being far from home and in such a different time zone from my family and friends.

If you could pick one piece of advice to anyone moving here, what would it be?
Expect for the transition to be difficult, but be as open-minded as you can. You're going to have an amazing experience that not a lot of people get to have, so make the most of it!

What has been the hardest aspect to your expat experience so far?
Being far from my family and friends, and adapting to a new culture.

When you finally return home, how do you think you'll cope with repatriation?
I'll be glad to be home, there are lots of things about London I'll miss. I try to make myself be conscious of that now, but of course it can be difficult when you're feeling homesick. 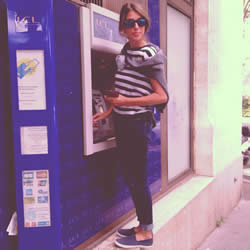 In Paris - one of the best things about living in London is its access to Europe.
What are your top 5 expat tips for anyone following in your footsteps?

Tell us a bit about your own expat blog.
Second Floor Flat actually started as my outlet - I needed something to both occupy my spare time when I moved to London and to give me a way to express myself. For anyone who likes to write, I'd highly recommend starting a blog to document your move and new home.

How can you be contacted for further advice to future expats coming to your area?
Via my blog.