From California to Montpellier, Bordeaux and Italy - Expat Interview with Colleen

Want to get involved? Become a Featured Expat and take our interview.
Become a Local Expert and contribute articles.
Get in touch today!
Filed: Interviews,Italy
Colleen LeMasters is a 30-something Californian, who moved to Europe while her boyfriend completes his Master's degree in winemaking. The two-year program takes them through Montpellier and Bordeaux, France, followed by Italy, all while she gets her (American-based) marketing communications business off the ground. Having never left the USA prior to the move, she is adjusting to a completely new lifestyle while navigating the twists and turns (both exciting and difficult) of expat life. Colleen's expat blog is called Colleen LeMasters (see listing here) 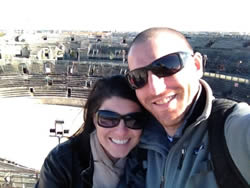 Colleen and Dave at the Colosseum in Nimes

Where are you originally from?
I was born and raised in Napa, California.

In which country and city are you living now?
Well....my boyfriend and I are jumping around quite a bit, but all throughout Europe. We started in Montpellier, France, then off to Bordeaux and ultimately Italy!

How long have you lived in Europe and how long are you planning to stay?
We arrived in Montpellier in September of 2012 (my first-ever trip to Europe!) and stayed until June of 2013. From there, it was Bordeaux for the month of June, then off to Italy for a year after that. We stayed on the island of Elba in Tuscany for the month of July (my boyfriend's father is Italian and they still have a family home) and our next Italian home is Udine.

Why did you move to Europe and what do you do?
Previously, I worked in marketing communications in the wine industry and my boyfriend was a winemaker. Though he'd been involved with winemaking for about 7 years, we decided a Master's degree might be a good idea (the "job insurance policy", we like to call it), so we downsized our possessions and headed to Europe to begin a two-year program. This was also an incredible chance for me to realize one of my own dreams and start a marketing communications business. While he is in school and studying, I design websites, write press releases/content, handle social media, and focus on giving small businesses a solid, cohesive brand identity.

Did you bring family with you?
No, it was just the two of us. One of the reasons that we thought now was the time to tackle the Master's program is because we don't have any children yet. Since the program has us bouncing around all over France and Italy, it would be tricky to do later down the road, when we do have kids. 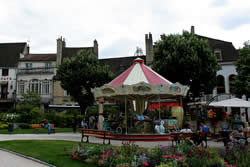 Carousel in Beaune- any town in France worth its salt has one!
How did you find the transition to living in a foreign country?
I would be lying if I said it was a piece of cake, but the biggest hurdle was the language barrier. I spoke zero French going into this and found the language tricky to pick up. I studied Spanish so Italian was a bit easier but the first year in France--especially Montpellier was tough. I felt much more comfortable reading French (in part because I could take my time processing the words) than speaking with people. My palms would get clammy whenever the grocery store check-out person would ask me to tell anyone who got in line after me that the line was closed! Otherwise, everything was a learning curve and I feel like I rolled along with it, but the language was by far the toughest for me.

Was it easy making friends and meeting people; do you mainly socialise with other expats?
Sigh. It was tough. With language being so difficult for me, and not being in a typical work-environment here, I also found my (normally quite social) self very isolated in Montpellier. Before we moved, my mom took to the internet to find out everything she could about our soon-to-be new city. She also stumbled across a blog written by another expat about my age, who had moved from my area of California to Montpellier. I immediately emailed her and was incredibly fortunate in that she showed me the ropes when I got to town. But, she was nearing the end of her time in Montpellier. It was hard to see her and her family go. Before she moved back to the States, she invited me to a bloggers luncheon that happened to be in Montpellier. It included a handful of expat bloggers from all around France and it was there that I met another blogger who was from Bordeaux. Upon arriving in BDX, she and I have reconnected and she's been wonderful. Through her, I also made some new friends as well. It made my time in Bordeaux SO much more enjoyable. Italy is a bit different, only because we are currently guests of his parents on Elba, so it's a bit more like vacation and not actual living, but since my boyfriend speaks Italian and the language is already easier for me, I have high hopes for meeting people in Udine! 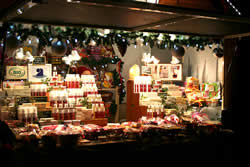 Marche de Noel in Montpellier
What are the best things to do in the area; anything to recommend to future expats?
The best things in Montpellier mainly revolved around food and wine for us. Actually, that seems to be the case anywhere we go! However, in our particular situation, we both left our "adult lives" (read: our day jobs of steady pay and things like company health insurance and 401k) for the student lifestyle so we couldn't carry on the way we'd been accustomed to in California. In Montpellier, our favorite spots included Fairview Coffee, where one can get a real American-style latte; The Black Sheep, which offered a ton of more "artisan-style" beers on tap; Sicilia, our neighborhood pizza place (go early or make a reservation!) and Burger N' Co where I indulge in my guilty pleasure of a bacon cheeseburger. Our time in Bordeaux was so limited that we truly didn't have as much time as we'd have liked to explore. In Montpellier, we took day trips to neighboring cities (Sete, Avignon, Arles...) but the school schedule in Bordeaux left little time for exploration. For Italy, I'm sure there will be a ton to do and see and I'll be recording every bit of it on my blog!

What do you enjoy most about living here?
I love the fact that I walk everywhere. Having a desk job and no car, I'm forced to do it and I just feel better. Walking also means that I'm a better grocery shopper, as I can only buy what I can carry! Oh, and the farmers' markets. I've always loved the wonderful colors and displays of a local market, no matter what country, and the fact that I can find one just about any day of the week is fantastic.

How does the cost of living in France compare to California?
Eek. California is expensive for the USA, but we found France to be almost equally as expensive, especially where rent is concerned. Taking the exchange rate into account, in both Montpellier and Bordeaux, we paid about the same in rent but got way less of a place for it. Plus, on a modified student budget, you're forced to watch your pennies euros closer, so everything seems magnified. Market at Les Arceaux in Montpellier
What negatives, if any, are there to living here?
I would have to say being so far away from my family, which is exacerbated by the 9-hour time difference from California. I have a huge extended family, and we're all pretty close. We're missing graduation parties, birthdays and family dinners, which is hard for me. The other negative is that so far, 2013 has been the coldest year in Europe is a LONG time. I hate cold weather. I thought the South of France would see a month or two of chilly temps and instead, I could count the sunny days above 65F on one hand. Even Bordeaux has only had about three sunny days while we were there. July in Italy has finally paid off and it's warm and sunny; good thing, too, or I would have thought I lugged all my summer clothes across the globe for nothing!

If you could pick one piece of advice to anyone moving here, what would it be?
One piece of advice? Whew, thatâs tough. I think that, regardless of where you move, reach out to other expats. More often than not, they (we) are happy to help point you in the right direction or offer tips, answer questions, that sort of thing. We understand what you're going through so don't be shy when reaching out. It has been my saving grace since moving abroad. Second to that, take a language class or two before coming, if you can.

What has been the hardest aspect to your expat experience so far?
The language barrier, by far. Plus, with the bad weather most of my time here so far--it's extra isolating. No one wants to go out in the cold and rain! Also, I miss Mexican food. A lot.

When you finally return home, how do you think you'll cope with repatriation?
Eventually we will head back to California to put this winemaking education back into practice and I'm really excited at the thought of it. It will signal the end of something that was difficult for me, yet I made it through and it will also be the start of some larger life moments to which I'm looking forward: our wedding, starting our family....It's been an experience over here, but there certainly is no place like home. 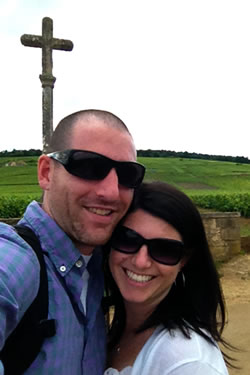 Visiting the famous Domaine de la RomanÃ©e-Conti vineyards
What are your top 5 expat tips for anyone following in your footsteps?

Tell us a bit about your own expat blog.
My blog was actually started in 2008, when I left California (the first time) to live in New Orleans, Louisiana for two years. As I mentioned, I have a rather large extended family and rather than tell the same stories and share the same experience over and over again, I created the blog. I've always love to write and design/code websites, so it was the perfect marriage of the two, while also serving a communication purpose with my family.

How can you be contacted for further advice to future expats coming to your area?
The best way is via my blog (see link below) Feel free to leave a comment, or email me there, but I'm also on twitter: @viaColleen

Colleen is an American expat living in Italy. Blog description: A California girl at heart, my adventures have taken me to my first-ever trip to Europe (France and Italy) while my Better Half studies wine; I help when tasting is involved.