Bringing up children in England as a Serbian Expat

Want to get involved? Become a Featured Expat and take our interview.
Become a Local Expert and contribute articles.
Get in touch today!
Filed: Family,England
The decision to leave my native Serbia for United Kingdom happened many years ago. My country was at war with its neighbours Croatia and Bosnia, prospects for young people seemed quite bleak, and something happened to my generation â we became very restless and many of us moved abroad before we even became of age. In my class in high school there were thirty six young people, and ten of us ended up living in other countries before we turned eighteen. Majority went to the USA, some to United Kingdom and a few went to other European countries. But one thing you donât realise when you make such life changing decisions so young is that they really will be life changing. You focus on the near future and canât actually imagine what it might be like still living in that foreign country ten, twenty, fifty years later. You focus on the immediate benefits and advantages and are unable to appreciate the draw backs, most of which only become visible after a long time of living as an expat. Not that there isnât any turning back â thankfully, any of us could go back, in a physical sense, if we wanted to. But emotionally, it isnât so easy anymore. Once you take such a huge step, especially if you do so at the beginning of your adolescence - the most formative years of your life - you are likely to become shaped by your expat experiences too much to simply turn around and try to re-join the life youâve left behind. 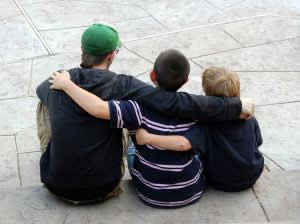 Photo credit: LilGoldWmn (SXC)
One of the things I certainly never thought about was what it might be like bringing up children in a foreign country. I also never really considered that I might one day be married to and having children with someone of a different nationality to me. But all that describes my life today. I am married to a (wonderful) Englishman and we have two amazing children under the age of 3. For many people, having the help of their family during those demanding early years of parenthood (although, which years of parenthood would be undemanding!) is something they can take for granted. But for expats thatâs most likely not the case.

By coincidence, I had the first one of my children in the same year as two of my cousins in Serbia. Our pregnancies were very different. While they were seeing their mums and other family on an almost daily basis for company, chats and reassurance, I could only speak to my mum over the telephone and Skype. There wasnât anyone except my husband to help me through the very tough days of pregnancy sickness (I hesitate to refer to it as âmorning sicknessâ, when it was a 24/7 problem!) and after a long and difficult labour, when we finally came back home with our new baby, there was no one immediately there to help us out. My mum was able to join us some three weeks later and what a difference did her arrival make! All of a sudden, being new parents became manageable, easier, we were actually able to start enjoying it. My cousins in Serbia would have had a âhead startâ on us because straight away they would have had the assistance of mothers, aunties and all the support network you might expect in quite a traditional society.

But not all the differences were negative. When you âsign upâ for the expat life, you take the good with the bad. In obstetric terms, the UK is light years ahead of Serbia. My cousins had to have a very traditional, Serbian, intervention-based approach to pregnancy and birth, with many invasive routine practices which havenât been used in the UK since 1970s. They didnât have much control over their birth experience, couldnât have their husbands present at birth, and were subjected to various procedures that are unpleasant and would be considered totally unnecessary here in the UK. I, on the other hand, was able to enjoy a very natural, back-to-basics approach where I was treated with a lot of dignity and allowed to stay in charge of my own body and my own baby. This meant a great deal to me and also enabled me to recover a lot faster after birth than what was the case with my cousins.

Whether that fully makes up for the fact that I went through these experiences without direct support of my closest family, is hard to say. Of course, it isnât just the expats like me who may be enduring a bit of loneliness when it comes to starting up families. The change in the overall structure of society means that there is less family support available for British people too. Here, the government tries to compensate for that with an artificial support system incorporating midwives and health visitors whose role is, essentially, to replace the knowledge and help new mothers would have traditionally got from their families, as well as mother and baby groups who are there to provide company and social support. This doesnât really exist in Serbia because it is not needed.

Now that my children are a little bit older (two and a half year old girl and a nine month old boy), different challenges are appearing in our expat life. We live in Cheltenham which is a mostly English town. Perhaps there are other Serbian people here but I have never met any and I havenât been able to find any Serbian groups, schools, nurseries, churches or any similar expat environment, where my children might be able to interact with other Serbian people (except for me). This means that already their identities are strongly leaning towards exclusively English rather than being a balanced mix. My daughter speaks just English however much I try to ensure that I speak Serbian to her at home. An additional issue is that my husband only speaks English. So, should you, with the aim of bringing up bilingual children, enforce a strict rule of âone parent one languageâ (OPOL) and hence leave my husband left out of many conversations, or should you be more flexible in using the languages but risk the children never actually learning to speak Serbian? And where does that leave their entire Serbian side of the family? These are not easy questions to answer and for many things we are only learning how to handle them as we go along.

Still, all the reasons why I came over to the UK in the first place still stand: politically and economically, this is a much easier place to live than Serbia. Here, my children will have more opportunities to learn, work, travel and live life safely and enjoyably. For this I am very grateful and my own sacrifices seem more than worth it. I will do my utmost to keep my children connected to their Serbian background by taking them to Serbia as often as possible and by fostering close relationships with all the family there, especially my mum. Finally, I will try and pass on to them at least some of that enduring love I feel for my home country, although life took me in a different direction â home is still home and I hope it will be at least a second home to my children, too.

Aleksandra Andrejevic-Bullock is an Serbian expat living in England.

Alexsandra, I found your piece informative could you possibly write to me personally on my email I too am serbian looking to move to England and would like to have a chat with you. Thankyou!!