Want to get involved? Become a Featured Expat and take our interview.
Become a Local Expert and contribute articles.
Get in touch today!
Filed: Interviews,Germany
Federico lived his first 26 years in a microscopic italian village that you rarely find on maps. Once he realized that the careers of tarot reader, screenwriter and king of Burkina Faso werenât really coming his way, he decided to move to Berlin and started working in the marketing field. In his free time he likes blogging, learning german and lowering his life expectancy one Kebab at a time. Federico's expat blog is called A More Quiet Place (see listing here) 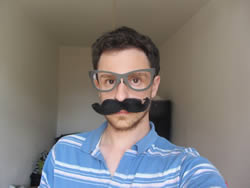 Here's the interview with Federico...

Where are you originally from?
A microscopic village in the north of Italy.

In which country and city are you living now?
Germany, Berlin.

How long have you lived here and how long are you planning to stay?
I've lived here for two and a half years and I'm not planning on moving any time soon.

Why did you move and what do you do?
I used to have a long distance relationship with a guy in Berlin, so I applied to a job here. After the company turned me down I kept living my life in Italy without really looking for other opportunities until eight months later, a couple of hours after my (now ex) boyfriend broke up with me, they called me up out of the blue and told me I could have the job.
I took it.
The minute I become famous I expect a movie to be based on this, probably starring Zoey Deschanel as me.
Oh, and I'm currently working in online marketing, which can actually be a lot of fun. 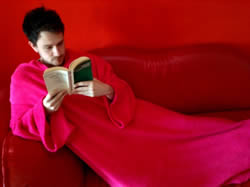 Slanket or my winter uniform
Did you bring family with you?
Hell no.

How did you find the transition to living in a foreign country?
Shocking. I didn't know a word of German and I had never actively used English in my life, which made the language barrier thick and isolating at times. In addition to that the small sized, small minded environment I came from was clashing hard with Berlin's inner extravaganza and open mindedness, making my small-town-boy beliefs shatter.

Was it easy making friends and meeting people; do you mainly socialise with other expats?
The workplace and german class were, in the beginning, the main social occasions. They were both young, friendly environments and it wasn't difficult at all to make friends there, especially with other expats who were living my same experience. 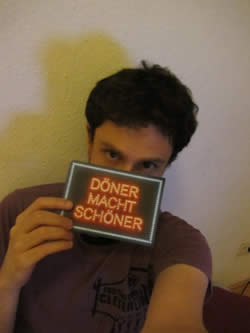 Doener makes you beautiful
What are the best things to do in the area; anything to recommend to future expats?
Visit art galleries, have a beer while sitting along the canal, play drunk ping pong in ping pong bars, eat delicious kebab from some "Imbiss", bar hop in Neukoelln or Kreuzberg, go to every concert you can.

What do you enjoy most about living here?
Berlin has a vibrant cultural/art scene and it's a melting pot of ideas, cultures and lifestyles so different and so enriching if you're curious enough to let them touch you.

How does the cost of living compare to home?
It's so much cheaper than home, especially when it comes to rents.

What negatives, if any, are there to living here?
People leave and you can't stop them. Also, Berlin is the poorest city in Germany and it's far from being the "Eldorado" many people think it is. 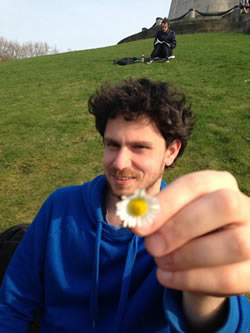 Chilling out at Treptower Park
If you could pick one piece of advice to anyone moving here, what would it be?
Let the city grow on you. Some things will immediately hit you in a positive or negative way, but a lot of other aspects (mostly regarding people and culture and society) require time to be understood and appreciated.

What has been the hardest aspect to your expat experience so far?
Money was super tight in the beginning. During the first year I had a full time office job along with a side writing job as a freelancer, both for german companies based in Berlin, and still my annual income turned out to be way beyond the poverty level.
I was this close to starting a hip hop career.

When you finally return home, how do you think you'll cope with repatriation?
I'll be in denial for a couple of months and then I'll become as lame and annoying as Season three Jack. 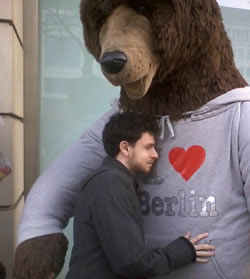 Hugging Berlin
What are your top 5 expat tips for anyone following in your footsteps?

Tell us a bit about your own expat blog.
It's a (supposedly) funny take on my life and whatever I see happening around me, in complete disregard of my almost disintegrated dignity.

How can you be contacted for further advice to future expats coming to your area?
On the blog you'll find my email address and a million social network profiles ;-)

Federico is an Italian expat living in Germany. Blog description: A blog about what I do, see and think in Berlin. With a lot of humour and almost no dignity.

Love the pics & interview Frederico! As a fellow expat in Berlin, I am constantly amused by your interactions with the city. Although, it is really too bad you turned away from a hip hop career. I have a hunch your raps would be amazing.