Want to get involved? Become a Featured Expat and take our interview.
Become a Local Expert and contribute articles.
Get in touch today!
Filed: Interviews,Japan
Ashley is a born and bred American who always wanted to travel abroad, but spent most of her school breaks visiting family along the east coast. After five years of studying at university to become a physics teacher, she decided to change course and teach English in Japan for a year. One year turned into two, which turned into three, and she is still in Japan. She lives in Shizuoka prefecture, where she has a picturesque view of Mt. Fuji from her apartment and classroom. Ashley blogs about her observations of Japanese culture, her life, and her adventures on her expat blog, For Now, Japan (see listing here) 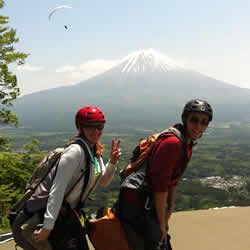 Here's the interview with Ashley...

Where are you originally from?
Richmond, Virginia, which is about 160 km south of Washington, DC.

In which country and city are you living now?
I'm living in Shizuoka, Japan, which is about 160 km southwest of Tokyo.

How long have you lived here? Why did you wait so long to start a blog?
I moved here about 3 years ago in August of 2010. I started a blog when I first came, but did not know about the expat blogging community (or blogging communities in general) and knew it was only read by a few friends and my mom. I deleted it because it wasn't worth the effort. After discovering the world of expat blogs and reading some of them, I realized it wasn't too late for me to start my blog and join the community.

Why did you move and what do you do?
It was always a dream of mine to work and live abroad, and I was always drawn to Asia. The energy, the collectivistic society, the food, the templesâ all were so different from what I had known in America, and I wanted to understand it more. I found out about the JET Program through small talk with a stranger and went home and researched it. I decided to apply, was accepted, and now I am an Assistant Language Teacher (ALT) at a top-tier high school in Japan (so thank you stranger who changed my life!) 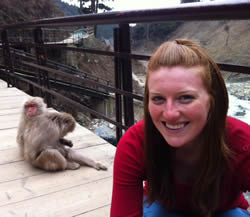 Snow Monkeys in Nagano
Did you bring family with you?
No... but they are never too far with the advent of iPhones, Facebook, and Skype.

How did you find the transition to living in a foreign country?
It was long, but it has been so much fun along the way. Knowing three words of the language and none of the three (!?) writing systems ensured that even the simplest tasks were a challenge when I arrived. However, it was far from impossible and was character-building (it does help that Japan is fully developed). You get used to not understanding the conversations around you, or being able to read menus with ease, or knowing what exactly the food you're eating is.

Was it easy making friends and meeting people; do you mainly socialise with other expats?
I had the advantage of coming with a program that has a really strong support system. That being said, there is such a small community of expats in Shizuoka that I've befriended many expats who are not on the JET Program. It can be a little trickier making Japanese friends not knowing the language, but fortunately the Japanese are some of the friendliest people and will go out of their way to make you feel comfortable. The Japanese friends I have made do have an interest in speaking or studying English. 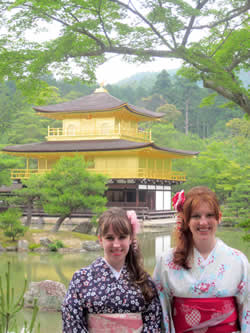 Wearing Kimonos at Kinkaku-ji
What are the best things to do in the area; anything to recommend to future expats?
My town is teeny! I guess you can see Mt. Fuji? Shizuoka prefecture has many ryokans (Japanese-style inns) and onsens (hot springs) in Izu peninsula that are renowned. Shizuoka is between Nagoya and Tokyo and is a stop for the bullet train, so it's good for visiting those cities too.

What do you enjoy most about living here?
The efficiency and the work ethic â so many things here are made for convenience, such as vending machines on every corner, paying bills at a convenience store, and the ease of taking public transportation. Also, people here work very hard and for no tip. You never have to worry about being ripped off.

How does the cost of living in Japan compare to America?
Japan has a bad reputation for being expensive, but in many ways its not. Going out to eat looks more expensive, but the prices on menus include tax and tip (which is different from America), so you end up paying about the same. That being said, beer, fruit, gas, and public transportation is more expensive.

What negatives, if any, are there to living in Japan?
One of the most difficult things to accept about living in Japan is that you are- and always will be- an outsider. Many Japanese people will go out of their way to show you around the country and show you how amazing the country is and want you to love Japan, but there are also the moments when you're reminded that you are a gaijin (a foreigner). It can be very lonely and hard to digest, especially coming from an immigrant-friendly country. The other negative is the lack of insulation in buildings in Shizuoka- being cold for the majority of winter isn't pleasant for a southern girl. 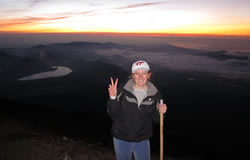 Sunrise from the summit of Mt. Fuji
If you could pick one piece of advice to anyone moving to Japan as an American expat, what would it be?
I recommend learning the katakana writing system first, preferably before you come. Katakana is the writing system that is used mostly for foreign words, which when you don't know any Japanese, is the easiest to understand. It only takes a day or two to learn (if you sit down and do it), and you will be able to read some items on menus, some store signs, etc. But be careful: sometimes the foreign words written in katakana are not English and/or don't make sense (Viking for "buffet"... what?).

What has been the hardest aspect to your expat experience so far?
Being away from home for 3 years of my 20-somethings means I have missed weddings, graduations, and other special events of the people I grew up with and love the most. Even being away for the smaller events like Thanksgiving are tough. Skype and watching recorded videos helps, but it's also one of the accepted realities of being an expat. 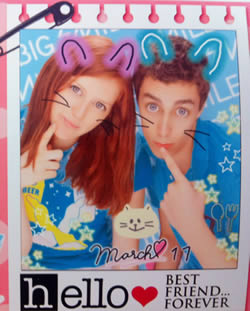 Purikura (Photo Sticker Booth)
What are your top 5 expat tips for anyone following in your footsteps?

Tell us a bit about your own expat blog.
As I said above, I started this blog more than 2.5 years after moving to Japan. I realized that it was time to record my experiences in Japan before the things I've taken for granted as common knowledge about life in Japan become forgotten. I blog about my travels, the daily happenings of my life that are related to Japan, and also interesting aspects of Japanese culture I'm inspired to write about. Unfortunately I don't have a camera, so all of my pictures are taken with an iphone.

How can you be contacted for further advice to future expats coming to your area? The easiest way to contact me is through the contact section of my blog and I'm also on twitter at @asmota (see links below). If you have a quick question you want to ask. If you have questions about living in Japan, visiting Japan, or the JET Program application process, I am more than happy to share with you what I know!

Ashley is an American expat living in Japan. Blog description: I'm a 5'8" redhead teaching English and trying to fit into daily life in Japan with my beginner's level Japanese. I write about my travels, my life, and cultural differences I spot along the way.