Home » Expat Articles » Speaking and Language » To Learn, or not to Learn, the Local Language

To Learn, or not to Learn, the Local Language

Want to get involved? Become a Featured Expat and take our interview.
Become a Local Expert and contribute articles.
Get in touch today!
Filed: Speaking and Language,

When I moved to Slovakia, I made a decision not to learn the language. Of course I mastered those phrases you use in everyday life: ordering a glass of wine; wishing a friend âgood dayâ; asking for the bill. The communication value was limited, but people appreciated my efforts. The bottom line, my move to Slovakia was temporary. Slovak is a language spoken in this one very small country. Some years ago, I decided to master French. I am still pursuing that goal. My aging American brain can't handle a third language. Or at least this is how I rationalized it. 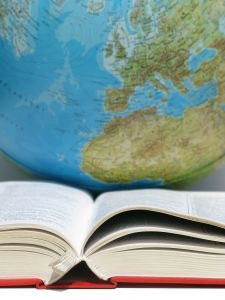 In those early days in Slovakia, not speaking the language created almost daily stress. Language obstacles lurked everywhere: trying to buy furniture and arranging delivery; being lost and needing directions; completing a simple transaction like buying an annual tram pass. I would have paid dearly to install a language switch in my brain which could click over to Slovak. But as the months passed, and my ability to communicate using tremendously simplified language improved, I learned to achieve my most basic needs through a series of nouns and gestures. I became, linguistically, a fully functioning two year old.

After nearly a year in Slovakia, I returned to the United States for a brief visit. I was besieged by English. I could no longer read on the metro, focus completely on my daughter's dinner conversation or shop unaware of what the woman in the grocery store was âblah blah blahingâ into her cell phone. And it dawned on me. I love not knowing the local language. I realized how intrusive, and often annoying, random conversations are in my everyday life.

Now, I am living in Hungary. Itâs another move which will most likely be temporary. I have managed to switch my âdakujamsâto âkoszonomsâ. I no longer tug on the store door when the sign very clearly says it is âzarvaâ. Iâm about as fluent as Iâm going to get. I went to lunch with a Hungarian friend yesterday. He was poised to order my lunch for me, but I waved him off: âGomba, Salad, Yogurtâ. (English translation, âIâll have a side of mushrooms and a salad with yogurt dressing.â). He was impressed when the non English speaking woman handed me exactly what I had ordered. It is a skill in itself â learning to simplify your English to the very minimum number of words needed to complete the transaction.

Confusion is the white noise of my current life. The banal and silly conversations, so freely shared in the public domain, are lost on me. Today, my husband and I spent an hour trying to set up our phone, translating the instructions on the internet. We finally gave up, and I left for work ruing my Hungarian ignorance. Then, during my 45 minute commute, I wrote a first pass of a blog. Although Hungarian swirled all around me, I typed without distraction. On those rare days when a group of people sit down and converse in English, I sigh, stop what I am doing and close my eyes. It happens so infrequently, itâs a nice diversion and creates some dinner conversation fodder. I would still pay dearly for the language switch in my brain. I just realize, more times than not, Iâd keep it switched off.

Julie Callahan is a 30 year veteran of corporate America who until recently was living and working in Bratislava, Slovakia, but has now moved to Budapest, Hungary. She is joined in this adventure by her husband, Pat, a fellow wanderer and â more importantly - a photo buff. With their home, car, and most of their âstuffâ sold, and the remainder tucked away in storage, they plan to daisy chain a life which blows around the world. The intent is to settle down and nest; making new friends and becoming part of the local community before moving on (or not). The travel instrument of choice is a microscope not a telescope. Julie plans to use this lifestyle to enable an earlier, and more interesting, retirement than would be possible if she remained in her native United States. Her three grown children wonder when this itinerant life will conclude. Frankly, she does also.

If you have anything to add about your own experience relating to this article, or perhaps have a question for Julie please leave her a comment below!