Want to get involved? Become a Featured Expat and take our interview.
Become a Local Expert and contribute articles.
Get in touch today!
Filed: Interviews,England
Cathy is married and lives with her husband and two children in East Sussex. She caught the travel bug in the late 1990s, when she saw Europe for the first time. This included a trip to see Jane Austenâs house and also watching county cricket in Kent since there were Australian cricketers playing. A walking tour in Italy in 1999 sealed her fate when she met the man that she would end up marrying. She started off her married life in Italy for 18 months and then moved to Australia for 5 years. She then moved back to Italy in 2006. Mid 2012 saw the family moving to England.. Cathy blogs at An Italophile (see listing here) and Wandering Sheila (see listing here). 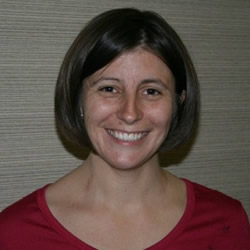 Here's the interview with Cathy...

Where are you originally from?
Australia

In which country and county are you living now?
England, East Sussex

How long have you lived here and how long are you planning to stay?
Weâve been here just over 6 months and will probably end up staying at least until the kids have finished school.

Why did you move and what do you do?
In 2006 we decided to move from Australia to Italy to take over and expand a family business that my mother-in-law had started. We also had the aim of our children becoming bilingual. After 6 years we had achieved our aim of the kids speaking a second language and we decided that we wanted to move on. Blogging has become a great outlet for me. Whilst we were in Italy, I worked for my husbandâs company. I also worked for a language school and have had a bit of ESL teaching experience too. Since moving to England, Iâve done a bit of office temp work, and have continued my blogging. I have some ideas that I want to work on for 2013. If youâre interested I will be sharing what these are on my blogs. 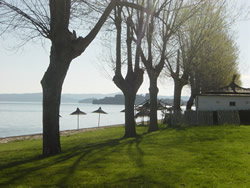 Capodimonte, Lazio on the shores of Lake Bolsena
Did you bring family with you?
Yes. In the move from Italy to England we also brought our cat.

How did you find the transition to living in a foreign country?
Really difficult. But it wasnât a new experience. When I was first married I lived for 18 months in Italy so I knew in a way what I was getting myself in for. I was really young then, I am really shy and I found it hard to acclimatise to the situation. I also became pregnant a month after we got married, and then life snowballed. For me, moving back to Italy in 2006 gave me a second chance to work at my language skills and to grow as a person. Iâve also seen the benefits of our life in our children.

Was it easy making friends and meeting people; do you mainly socialise with other expats?
Not at all. Although given that my husband grew up in the area where we ended up settling in Italy, he had a ready-made group of friends. However I did find I had more in common with some other ladies. No, to begin with I didnât seek out any expats at all, but then I found that I did want to be able to converse and share experiences with people who could understand my background and me theirs. 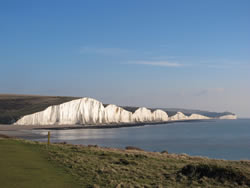 The Seven Sisters, a series of chalk cliffs by the English Channel
What are the best things to do in the area; anything to recommend to future expats?
If we are talking about my area in Italy, it is a really beautiful place. On my last day there I went for a drive along the lakefront to soak it all up before leaving it behind. Capodimonte (Lazio) is a town of about 1800 people but the numbers grow significantly during the summer. We spent a lot of time on the lakefront because my son and husband love to sail. Most of our summer was spent based at the local sailing club. There is so much to recommend particularly if you are fond of history. Tuscania, the town where my husband grew up is well worth a visit. There are many churches to see, but one of the highlights is Saint Peters. There is an international primary school in Viterbo (St Thomasâs), two of my friends are teachers there.

I love where we have settled in East Sussex as we are on the coast, so we are close to some great walks (hilly terrain ones and also flat along the seafront). There is so much to do and explore here. I feel that we have only just scratched the surface.

What do you enjoy most about living here?
In Italy, I loved the position of our dream house. It took us a while to finish it and we didnât get to stay in it too long.
After the bureaucracy with doing things in Italy, I love the simplicity of tasks in England. 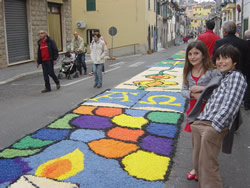 Cathyâs kids on the day of the infiorata in Capodimonte, April 2012
What negatives, if any, are there to living here?
Italy â bureaucracy. But after a time, I just shrugged my shoulders, did what I had to do and got on with it.
Both countries â my family is on the other side of the world. In particular I miss my parents, my sister and my gorgeous nephew. Iâd also like a tardis to transport my best friend when I have needed her over the past 6 years.

If you could pick one piece of advice to anyone moving here, what would it be?
Do your research and make sure you make an effort to learn the language. At times I have felt lazy because I relied on my husband to help me. If I could turn back time I would have made a more concerted effort to learn Italian faster.

What has been the hardest aspect to your expat experience so far?
Isolation. 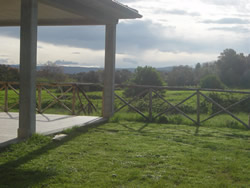 Cathyâs house and part of the garden in Capodimonte
What are your top 5 expat tips for anyone following in your footsteps?


Tell us a bit about your own expat blog.
I have two expat blogs. An Italophile (http://www.anitalophile.com/) deals with all things Italian. Since moving to the UK I have started up Wandering Sheila (http://www.wanderingsheila.com/).

How can you be contacted for further advice to future expats coming to your area?
You can contact me on either of my blogs. I am also on twitter @cathylpowell.

An Italophile has an ExpatsBlog.com listing here and Wandering Sheila here where you read the latest 5 posts and leave a quick comment if you like them! If you liked this interview with Cathy, please also leave her a quick comment below.
Please share:

Comments » There are 3 comments

Such a great interview!! I've been following Cathy's blogs for a while now, but I still learned new things here. :-) As an expat myself, I really connect with Cathy's comments about doing your research, figuring out where you can work, and learning how to deal with feeling isolated and lonely. It's a good life, and even though it can be hard in the beginning, it is so worth it. :-)

I have been following Cathy's blog for a while, even while she was living in Italy .. and now she is in the UK , I continue to follow as Cathy is showing me her area . Cathy takes super photos, shows us great walks etc etc .. Well done Cathy .... Yes we are hoping to meet one day :-)

I first met Cathy virtually when she was still living in Australia and we were house hunting, using a family property business in Italy that she was working for. We have since gone on to sell property in Italy via this business and have become real life friends with Cathy, her husband and children in Italy. Cathy and I have interests in common, love of Italy, reading and blogging and we support each others blogs. Thoroughly enjoying the latest adventures she shares with us in her blogs.