Want to get involved? Become a Featured Expat and take our interview.
Become a Local Expert and contribute articles.
Get in touch today!
Filed: Interviews,China
Sonja is a German marketing manager who works in the sporting goods industry. Consequently she loves diving, biking, surfing, and playing golf. Sonja relocated to Shanghai in June 2011 and ever since her dive logs have been off the charts, and her golfing has gone to nil. Through her blog Riot, Riot! (see listing here) Sonja chronicles the day to day, the travel adventures and shares insights on music, consumerism and food. Shanghai has become a true home and "Shanghighness" is a constant state of mind. It's not forever, but definitely for a while. 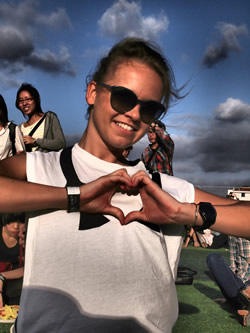 Here's the interview with Sonja...

Where are you originally from?
MÃ¼nster, Westfalia, Germany

In which country and city are you living now?
Shanghai, China

How long have you lived here and how long are you planning to stay?
I moved to Shanghai in June 2011 and am not so sure how long I'll stay. The initial plan was to stay for two years, however, that is approaching rapidly and I am not ready yet to move back to Germany, or anywhere else for that matter. There's still too much left to explore and my Mandarin is still on kindergarden level.

Why did you move and what do you do?
I have been working for a German Sporting Goods company in Product Marketing for the past 5 years and after living in a rather small German city for a while I felt like I needed to get out and have a change of scenery. Both literally and figuratively. I had a chat with my boss at the time who was very supportive and a mere 9 months later I was ready to relocate to Shanghai - still with the same company but slightly different job scope and - obviously - a very different "scenery".

Did you bring family with you?
No - I moved all by myself.

How did you find the transition to living in a foreign country?
I have lived in various countries before, so I didn't think China was going to be that hard. I spent a high school year in the U.S. when I was 16 and both studied abroad and also worked abroad before, in the US, Ireland and Hong Kong. However, Shanghai did kick my butt a bit. It's definitely a culturally more challening place to go, considering it was the first time where I sopke zero language, wouldn't live with roommates and had to properly start over.
It's been really fun and it took about 6 months for me to feel entirely comfortable. Now, about a year and a half later, it's truly home. Even when I've been on a business trip to Germany and return to Shanghai it's a very warm and comfortable feeling of 'coming home'. 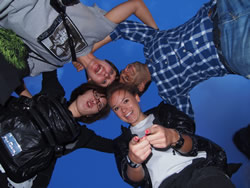 Was it easy making friends and meeting people; do you mainly socialise with other expats?
I'm lucky enough to work for a company that's very young and dynamic. Several other colleagues relocated around the same time I did and we all became good friends.
I do mainly hang out with other expats. Making close Chinese friends has been hard, I do have a few American- or Canadian Chinese friends, who are both from a cultural and from a language point of view easier to get to know.

What are the best things to do in the area; anything to recommend to future expats?
In one word: TRAVEL. Shanghai is such a convenient place to live in. Traveling both within China and also around Asia is extremely accessible and rewarding. A weekend trip to the Philippines? Sure, let's go!

What do you enjoy most about living here?
Shanghai changes all the time. Every day some new little shop, bar or restaurant opens. Others are gone. You can keep exploring without ever having to say you've seen it all.
The people are crazy, yet lovable. And there's nothing like riding the city. It wouldn't be the same without my bikes. 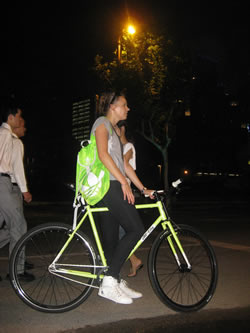 How does the cost of living compare to home?
It's not cheap. Living in Shanghai can in some ways be more expensive than living back in Germany. It depends on the standard of living you'd like to achieve.
If you want proper heating, like to eat import products and indulge in the local resturant and bar scene you easily spend a lot more than you usually would.
That said, you can live very cheap - if you live like a local and get out of your expat bubble.
It's entirely up to you.

What negatives, if any, are there to living here?
Being spit at (even if it's just accidental).
People cutting in line. Always.
It always takes at least 6 Chinese to fix something. 5 stand there and 1 attempts to make it happen.
If the elevator is full, there's room for at least 3 more people.
When using your cell phone in any public space, especially the subway, it's recommendable to talk extra loud.
Social network usage 24 hours a day (make sure you get your Weibo account as soon as you move here).

On a serious note: there's little regard for other people's belongings, comfort or even life when it's outside of your family circle. This can be discomforting at times.

But then again - this is a massive country on the rise. The amount of people, the size of cities and the rapid speed in which it all develops is breathtaking. 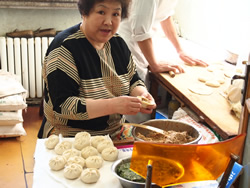 If you could pick one piece of advice to anyone moving here, what would it be?
Relax. There's absolutely no point in becoming upset about anything at all.

What has been the hardest aspect to your expat experience so far?
When I first moved I did have some downs. Not being able to communicate being the trigger for most of it. Being unable to tell the delivery guy where the furniture should go, the taxi driver where I live and the lunch lady what I would like to eat has been truly frustrating. Learning at least basic Mandarin makes life a whole lot easier. 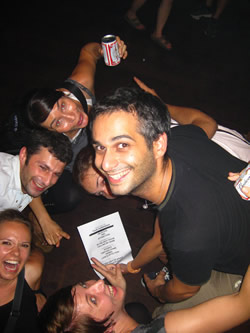 Tell us a bit about your own expat blog.
I've had riotrules.com for about 10 years now. Thus, it's not an expat blog per se, but rather an outlet of things I feel like sharing and a tool for me to go back and look at what happened at a certain point in time. It's for friends and family to keep in touch.
I love meeting new people and making new friends, my blog has always been a fun and easy way to get to know people from all over the place.

How can you be contacted for further advice to future expats coming to your area?
You can of course drop by the blog or just directly drop me an email via sonja at riotrules.com Find me at Twitter @atari_kid, and Pinterest/Instagram atari_kid.

Sonja blogs at http://riotrules.com/ which we recommend a quick visit if you haven't been already. Riot, Riot! has an ExpatsBlog.com listing here so add a review if you like! If you appreciated this interview with Sonja, please also drop her a quick comment below.