Want to get involved? Become a Featured Expat and take our interview.
Become a Local Expert and contribute articles.
Get in touch today!
Filed: Interviews,Brazil
For Tom Le Mesurier, a 4 month trip backpacking around South America turned into a new life in Brazil. This 'accidental' expat had no intention of leaving home permanently, but a chance meeting in Nicaragua changed everything. Today he lives in Rio de Janeiro and writes EatRio.net (see listing here) - a blog that covers all things in Rio, from restaurant recommendations, ideas for things to do and interesting nuggets about life in Rio. 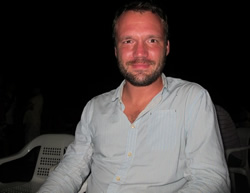 Here's the interview with Tom...

Where are you originally from?
A surprisingly difficult question to answer! I was born in Germany to British parents. After 2 years we moved to England and 2 years after that we moved to Jerusalem for a year. I spent the rest of my childhood in Winchester, a small city an hour from London.

In which country and city are you living now?
I now live in Rio de Janeiro, Brazil.

How long have you lived here and how long are you planning to stay?
I have been living here for 2.5 years and have no plans to leave! 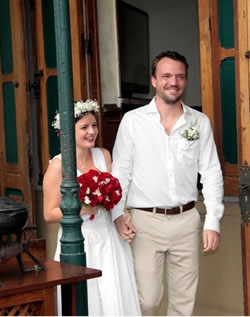 Why did you move and what do you do?
After 10 years working hard in London I decided that I needed a break. I planned a 4 month trip to South America which expanded into a year travelling throughout the whole of Latin America. While passing through Nicaragua I met a Brazilian girl who made a big impression on me. After a couple of weeks she returned to Rio and left me wondering what to do with myself! A few months later I made my way to Rio for what turned out to be a very successful reunion - 6 months later we were married! That was a little over 2 years ago.
I work as a business analyst for a UK company, providing services to a Brazilian broadcasting company.

Did you bring family with you?
No, I married into a Brazilian family - a life changing experience!

How did you find the transition to living in a foreign country?
It was tough at first. When I arrived, I had been travelling in foreign countries for the past year. Piece of cake I thought! Then I realised that there is a huge difference between travelling in countries and actually living there. Suddenly I had to think about finding a job, building a proper career, creating a real social life (not just backpacker friends who leave after a few weeks). I'm pretty open-minded and flexible to cultural differences, but I don't feel that my cultural transition is 'Complete'. Things get easier over time, but I'm still adjusting today, even after 2.5 years. 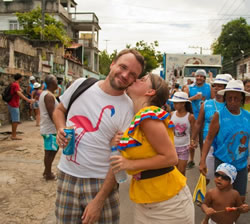 Was it easy making friends and meeting people; do you mainly socialise with other expats?
I did not find it easy to make friends and meet people. This was a shock, as I found it very easy to meet people when I was backpacking. Rio has a reputation for being a very social, party place, but many expats have reported that they find it hard to make real friends here. Cariocas (natives of Rio) are famous for saying "Hey, we must go for a drink next weekend" but very often they have no intention of actually doing it!
Originally I avoided the expat scene - I had images of fat businessmen smoking cigars at the country club or else a bunch of backpackers sitting in bars talking about 'home'. But also I guess I thought that socialising with locals was somehow more 'authentic'. Eventually I realised that I really missed having an easy conversation with a native English speaker. It can be a real relief to just have a chat, without having to rephrase sentences to make them clearer, without having to explain cultural references. My life here is actually quite a lot less social than it was back in London, but I'm happy to take things easy for a bit. Also, when you aren't going out every night, you have time to do all those things you always wanted to do! 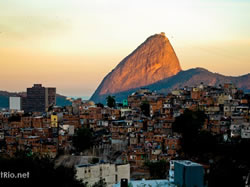 What are the best things to do in the area; anything to recommend to future expats?
I think the best things to do in Rio are (in no particular order) spend a day at the beach, go explore a favela (be sensible!), take a walk in the world's largest urban forest, visit a street market, hire a bike and ride around the lagoa, take a bus across town, go out drinking, have one too many caiprinhas, take a cab home!

What do you enjoy most about living here?
I love the weather in Rio! I always hated the cold British winters and that is no longer an issue. I also have a theory that the warm weather makes people more open and sociable. It's not unusual for someone you don't know to start chatting to you here - back in London if a stranger starts talking to you, people assume there is some ulterior motive.

How does the cost of living compare to home?
Rio is expensive! They say the only cities in Latin America that are more expensive are Caracas and SÃ£o Paulo. I would say that in many respects, Rio's prices are quite similar to London. Many friends have visited thinking their British pounds would go a long way and have received a nasty shock! 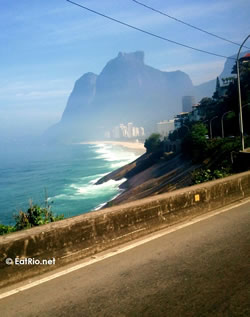 What negatives, if any, are there to living here?
Sometimes the chaos of Rio can be frustrating. The bureaucracy can transform the smallest task into a massive operation (it took me 2 years to open a bank account) - after a while it can really wear you down.

If you could pick one piece of advice to anyone moving here, what would it be?
Learn Portuguese! Your ability to speak Portuguese (and understand the locals!) will be directly proportional to how much fun you have here.

What has been the hardest aspect to your expat experience so far?
Learning to deal with being the odd one out. I think it would be very different if I'd moved out with a partner who was also non-native - we could be 'different' together - but I spend the vast majority of my time with Brazilians and although that can be great, there are times when I miss being around people just like me.


Tell us a bit about your own expat blog.
EatRio started as a place for me to record all the cool things I was learning about Rio. One day I would discover some amazing fruit that only grows in the Amazon, the next I'd learn about the sexy voiced lady who does the announcements at the airport. There are loads of boring bars and restaurants here, but there are also some really magical places hidden among them. When I thought about all the people who came here for a week or two on holiday, I felt bad that they were missing out on all these interesting things.
Over the years, the blog has expanded to include recommendations for things to do, restaurant reviews, safety advice as well as discussions on issues affecting people living in Rio (expats and locals!)
Originally my target audience was foreign visitors, but over time I found that more and more of my readers were Brazilians interested in how an outsider views their city. Today the split is roughly 50-50.

How can you be contacted for further advice to future expats coming to your area?
I can be contacted through the blog (see below), via twitter @eatrio_net or email eatrio.net{at}gmail{dot}com

Tom blogs at http://eatrio.net/ which we recommend a quick visit if you haven't been already. Eat Rio has an ExpatsBlog.com listing here so add a review if you like! If you appreciated this interview with Tom, please also drop him a quick comment below.