Want to get involved? Become a Featured Expat and take our interview.
Become a Local Expert and contribute articles.
Get in touch today!
Filed: Interviews,Singapore
Katrijn de Ronde followed in her motherâs footsteps when she took her toddler by the hand and followed her husband to the Far East isle of Singapore. The foreigner force is strong with this one â after her Asian childhood, she spent a gap year living with a Bolivian family and an exchange year studying Celtic history in Ireland. Stories are the common thread that holds her life together and she tells them at Singapore Tamtam (see listing here) 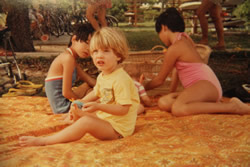 Here's the interview with Katrijn...

Where are you originally from?
I was born and have lived most of my life in the Netherlands. However, when I was 8 months old, my parents packed me up and moved me to Hong Kong, and a year and a half later to Singapore. I got back to the Netherlands just in time to start primary school, but too late to pick up the local dialect. As a consequence I speak proper, newsreader Dutch, but bizarrely pick up accents in English left, right and center.

In which country and city are you living now?
Almost thirty years after leaving the Lion City, I have returned â with my own eleven month old daughter in tow.

How long have you lived here and how long are you planning to stay?
We have been here for over a year, plan to stay at least another year, and who knows whatâll happen next? Weâre not big on long term plans.

Why did you move and what do you do?
Both S. and I have lived outside of the Netherlands and we liked the experience. So weâd been on the lookout for a chance to go off again, when a job for S. turned up in Singapore. 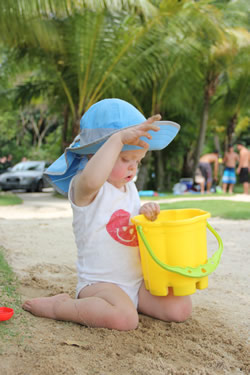 Did you bring family with you?
Yes. And weâre expanding at the moment, so weâll bring even more family back.

How did you find the transition to living in a foreign country?
Singapore must be one of the easiest countries in the world to move to. People speak English, itâs clean, safe, hygienic, itâs utterly child friendly, itâs got beaches on all sides and thereâs a huge and welcoming expat community. Also, S.âs company made a lot of the arrangements for us, so basically all we had to do was bring our stuff, show up when they told us to and sign on the dotted lines. I hear bureaucracy can be brutal here, though.

Was it easy making friends and meeting people; do you mainly socialize with other expats?
We mainly socialize with expats, as most of our social life consists of people Iâve met through play dates and the like, and many of S.âs colleagues are expats too. Singaporeans have extensive networks of family and friends, not to mention very busy working days, so itâs not easy meeting and befriending them. Again â that has been my experience in all of the places weâve lived in. 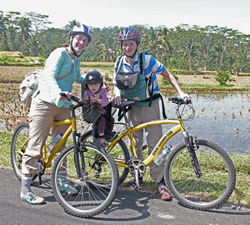 What are the best things to do in the area; anything to recommend to future expats?
Singapore is the hub for South East Asia â so travel! Other things include eating out, itâs a foodie paradise, take hikes in one of the many national parks around the island and keep an eye out for events: Singapore is usually included in any major tour of performers and exhibitions.

What do you enjoy most about living here?
The ease of life, although I do realize a huge part of that is because we are living an expat life and not a Singaporean life. I love how everybody adores our toddler daughter and how she is welcomed wherever she goes, be that a play date, a fancy restaurant, the beach or simply on the street. The safety too is a luxurious feeling â to be able to fling a bag onto a seat somewhere and go after our daughter without worrying, or to walk through the park at midnight and not feel apprehension when hearing foot steps, or to simply take a cab and not have to be on my guard for scams.

How does the cost of living compare to home?
Itâs more expensive, especially groceries. Donât be fooled by its location in the heart of South East Asia, Singapore is one expensive town! If you like your branded merchandise however, there is some prime shopping to be done. 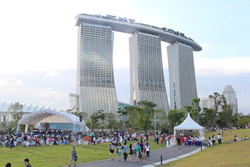 What negatives, if any, are there to living here?
The humidity gets to me every once in a while and it just never cools down, not even at night. The air only smells fresh after a tropical rain shower, and even then it only lasts for ten minutes. Weâre far away from family and old friends. Itâs been a lot harder than I expected to find work. I miss riding bicycles. A lot. Itâs a Dutch thing.

If you could pick one piece of advice to anyone moving here, what would it be?
Be prepared to have to figure everything out as you go along. It makes life so much easier and you wonât be disappointed if you just assume you donât know how things work.

What has been the hardest aspect to your expat experience so far?
Missing family and friends back home. Social media keeps me updated, but itâll never replace offline life.

When you finally return home, how do you think you'll cope with repatriation?
I think weâll be fine and fit right back in, but Iâve understood that that might be a huge misconception on my part. 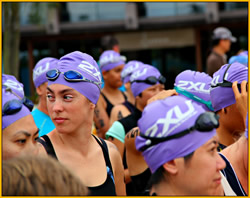 
Tell us a bit about your own expat blog.
Singapore Tamtam chronicles in a rather haphazard way my life as an expat wife in Singapore, the stuff I remember about the first time I lived here, the stuff Iâd like my daughter to remember and the stuff S. lets me write about him. Also: all other random thoughts and rants.

How can you be contacted for further advice to future expats coming to your area?
Via email â itâs on the blog :)

Katrijn blogs at http://singatamtam.blogspot.sg/ which we recommend a quick visit if you haven't been already. Singapore Tamtam has an ExpatsBlog.com listing here so add a review if you like! If you appreciated this interview with Katrijn, please also drop her a quick comment below.