Want to get involved? Become a Featured Expat and take our interview.
Become a Local Expert and contribute articles.
Get in touch today!
Filed: Interviews,Hong Kong
As a journalist, Brittany Hite was naturally curious about the world. After graduating from college, she worked her way to New York from the Midwest. But spending a few years in New York only made her more curious about the rest of the world, so she started applying for new jobs and landed one in Beijing. After spending a year there working for a Chinese government think tank, she moseyed her way down south to the warmer climate of the highly developed and efficient but harried world of Hong Kong, where she is an editor for a major American news organization. Brittany blogs at her site called Brittany Hite (see listing here) 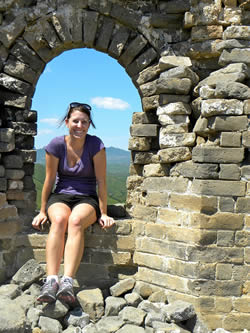 Here's the interview with Brittany...

Where are you originally from?
Indiana, USA

In which country and city are you living now?
Hong Kong

How long have you lived here and how long are you planning to stay?
3+ years in Asia: One year in Beijing, 2+ in Hong Kong. Unsure how long!

Why did you move and what do you do?
I originally moved to Beijing because I found a job there. Before that, I was working in New York but was feeling a bit restless. I was working on the international desk at a newspaper there, and I saw all the successful editors had overseas experience, so I figured I ought to try to get some too. And I thought it would be much better (and easier) to do while I was young without too many obligations.

How did you find the transition to living in a foreign country?
Moving to Beijing from New York City was a big culture shock (in comparison, at least it made moving to Hong Kong from Beijing seem so easy!). It was definitely hard in the beginning. When I moved there, I only knew one person in the entire country -- a college classmate -- and she wasn't even in Beijing but was in another city hundreds of miles away. It was scary at times, and lonely, especially because I didn't speak any Mandarin when I first moved there. But it was also thrilling to be taking in all these new things at the same time.

Was it easy making friends and meeting people; do you mainly socialise with other expats?
It was easier than I expected. I have found it much easier to meet people in Beijing (or Hong Kong) than in New York. It's kind of like oh, hey you're an American (or other foreigner)? Me too. We are both expats and have something in common, let's be friends. You don't get that in New York, at least when you're an American socializing with all other Americans. I also found how important your network can be -- I have so many friends who were just friends of a person I sort of knew in college, or whatever. Facebook has been a real asset in that regard -- whenever I moved, I simply put up a note asking for contacts of anyone in Beijing, and I was pleasantly surprised with how many people put me in touch with their friends or acquaintances -- many of whom are now good friends of mine.
I do mostly socialize with other expats, but I have some local friends as well, especially language partners who have become friends. One of the most fun parts about living abroad is that your circle of friends really becomes global: I've been at parties -- and it's not entirely uncommon around here -- where we've had someone present from every continent (well, except Antarctica).

What are the best things to do in the area; anything to recommend to future expats?
Well, I could write a whole book on all the things to do in Beijing/Hong Kong/China/Asia! In Hong Kong, it's great getting out and enjoying the outdoors. You always see it portrayed as such a cosmopolitan, skyscraper-filled city (which it is),but there's also a huge side of it that's rural. Something like only 25% of Hong Kong is developed, so it's great to go out to the islands and explore, go hiking, go camping, rent a bike at one of the parks.
In Beijing, there's tons of history all around and so much to see. It's really one of the best places to go as a tourist, although I found it to be a hard place to live. The Great Wall, the Forbidden City, the Summer Palace -- there's so much to see. I
Generally I also would just recommend going off the path. Eat at restaurants that don't have English menus, the food will generally be much better (and likely cheaper too) than the places all targeted at foreigners. Go to places that aren't in the guidebooks -- just go wander around a really local neighborhood and see what you can find. It'll be just as interesting as the "famous attractions." 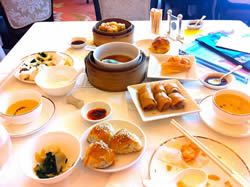 What do you enjoy most about living here?
The food and the travel! Hong Kong is a really great place to live because it's small, so it's a good jumping point to travel around the rest of Asia. Less than an hour an you're in another country. And in so many places in Asia, once you've bought your plane ticket, the other costs associated with traveling are quite cheap. You can do a weekend away for $300 (US) total. Everyone I know here loves going out for weekend trips -- to Japan, to China, to Southeast Asia and other parts. It's really great to get to see so much of the world without having to take a ton of vacation or time off.
I also can't say enough about the food. In Beijing, in Hong Kong, and every place I've traveled in Asia. I keep being astonished because the food just keeps getting better everywhere we go. I think I've yet to have a bad meal traveling in Asia. The food is also so lively -- coming from street markets and little local shops, freshly prepared, full of flavor and all so distinct. It's so much better than going to a boring chain restaurant in America.

How does the cost of living compare to home?
In Beijing, I think it's much cheaper. In Hong Kong, I think it's comparable, but still cheaper than New York, at least, though probably more expensive than other cities in the U.S. The rent in Hong Kong is what really hurts, but if you can find a reasonably affordable apartment, everything else (food, transportation, entertainment) is cheaper here.

What negatives, if any, are there to living here?
There aren't too many negatives in Hong Kong. The 12-hour time difference from home, and the physical distance from family and friends at home are the hardest thing. The humidity and the pollution can be stifling at times too.
Sometimes you get little cravings for things or places in America (like Target), but I think overall it works out since you also get to discover new things here.
It's also hard to complain because Hong Kong is also one of the easiest places to be an expat. Most people speak incredibly good English, and it's a highly developed city with very efficient public infrastructure.

If you could pick one piece of advice to anyone moving here, what would it be?
If you're on the fence, just do it! Even if you only live here for a year, it will change your life and your perspective forever. Also, don't sign a lease on the first apartment you find!

What has been the hardest aspect to your expat experience so far?
The hardest parts are missing family and friends, and also knowing you're going to have to miss out on some important events back home. I have at least three family members/friends getting married this summer, but I know I won't be able to make the 8,000-mile journey back for all three weddings. So it's hard having to choose and knowing you're going to miss out on lots of little things -- nieces and nephews' recitals and ball games, parents wedding anniversaries, etc. It's also very hard not being able to rush back home very easily on a whim if there's an emergency or when family members or close friends get seriously sick. It's hard to go back on a whim without planning it out. You know you have a very finite time you can go back home, so you have to try to weigh how serious it is with whether to go back. I keep hoping someday they'll one day develop an (affordable!) six-hour flight from Asia to America that would alleviate these problems.

When you finally return home, how do you think you'll cope with repatriation?
It really depends when I return and where. I have friends who have done it and they say it is tough. I think the hardest part will be getting used to the reality of not being able to just hop over to a new country once a month. Sure, you can travel domestically in America to many different places, but going from New York to LA, it's just not the same as going to countries as vastly different as Vietnam and Japan and India. 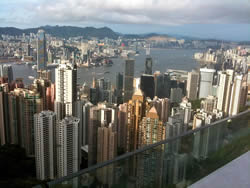 
Tell us a bit about your own expat blog.
I started my blog when I moved to China so that I could keep my family up to date on my experiences, and to save myself from having to call home and retell the same stories 10 times. I also hope that some of my experiences will prove useful to future expats or travelers (like the post I wrote about what to do when your passport is stolen, along with your wallet and all your identification). It's not something I do for money or recognition, just for family and friends, and it's also nice to have a record of it all somewhere, almost like a journal or scrapbook.

How can you be contacted for further advice to future expats coming to your area?
My email can be found on my blog. I'm always happy to help pay it forward to other travelers or expats!

Brittany blogs at http://brittanyhite.wordpress.com/ which we recommend a quick visit if you haven't been already. She can be found on Twitter @brittanyhite. Brittany Hite has an ExpatsBlog.com listing here so add a review if you like! If you appreciated this interview with Brittany, please also drop her a quick comment below.

I am also now a expat in Hong Kong studying at CUHK. I have been here for almost two weeks now and it has been an exciting, exhausting, and frustrating experience all at once! How long was it before you met other expats? Any advice on meeting new people that are so different culturally and socially?