Want to get involved? Become a Featured Expat and take our interview.
Become a Local Expert and contribute articles.
Get in touch today!
Filed: Interviews,Italy
Kate Bailward is a cat-loving, trifle-hating Englishwoman living in Sicily. In 2009 she came to Italy for a nine-month teaching contract. Now at the beginning of her fourth year here, she has given up teaching but has no plans to give up Italy any time soon. Kate's excellent expat blog is called Driving Like A Maniac; if you've ever driven in southern Italy the title is self-explanatory (please see listing here) 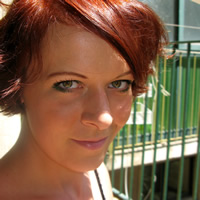 Here's the interview with Kate...

Where are you originally from?
I'm originally from a tiny village (pop. 582) near Bristol in the UK, which boasts a pub, a school and a duckpond with no ducks on it. When I lived in Puglia and Calabria, people used to ask me if I didn't find life in Maglie (pop. 14,981) and Palmi (pop. 19,320) too quiet. Little did they know ...

In which country and city are you living now?
I'm currently living in Catania, in the shadow of Mount Etna on the east coast of Sicily.

How long have you lived here and how long are you planning to stay?
I've lived in Catania for a little over a year, and I'm planning to stay until I decide I want to move on. Could be a year, could be five, could even be forever - who knows what the future will bring?

Why did you move and what do you do?
I didn't start my expat life in Sicily. For my first year I was in the Salento, at the bottom of the heel of mainland Italy. I then moved to Calabria for a year and thence to Sicily.
For the first two years I was teaching EFL (English as a Foreign Language) and writing on a purely hobby basis. Last year I decided to take the writing side of things more seriously and started to write professionally part-time, while still teaching English.
I have now given up teaching and am writing freelance travel and lifestyle articles while working on my first novel. 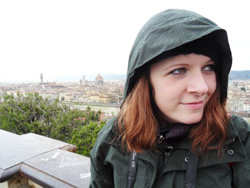 How did you find the transition to living in a foreign country?
At first it was hard. I had moved to Italy without speaking the language further than 'ciao', 'grazie' and 'arrivederci'. The Salento is not an area that holds many English speakers - their main tourists are German - so I felt very isolated for a long while. Once I'd started to get to grips with the language things became easier, but it was six months before I felt like I could even think about staying any longer than the end of my contract.

Was it easy making friends and meeting people; do you mainly socialise with other expats?
It's got easier with every different place that I've moved to. This is largely to do with the fact that my language skills have improved and I can now hold conversations with people in Italian that consist of more than just being able to say where I come from, what my job is and how old I am.
I do have English-speaking expat friends - mainly teachers from the different schools that I've worked in - but I also have Italian, Sicilian, French, German, Dutch and even Jamaican friends. I've never wanted to be one of those people that lives in an expat bubble and never learns the language or absorbs the culture. On the first point - I'm getting there, but on the second, one of the best compliments I've received recently was my Sicilian flatmate (an excellent cook herself) asking me for cooking advice. 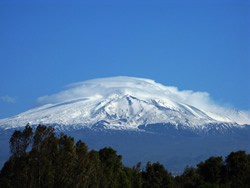 What are the best things to do in the area; anything to recommend to future expats?
I highly recommend going to local festivals whenever you can. Early autumn is the season of sagras (food festivals), so I'm currently enjoying getting out and about at the weekends and sampling different local foods and wines. Last weekend was the Sagra del Pistacchio at Bronte, and every Sunday in October there is a different food celebrated at Zafferana Etnea, on the foothills of Etna. At the beginning of November is the Chocolate festival in Modica (can't WAIT for that one!) and there are many more besides, celebrating everything from wild boar to honey to chestnuts.
In February we have the Festival of Sant'Agata here in Catania. This is an amazing spectacle celebrating Catania's patron saint, which I've written about on my blog here: http://www.katebailward.com/drivinglikeamaniac/2012/02/saints-and-sustenance/
Finally, as we are so close to her (and yes, she's female), you can't miss climbing Etna. Take a guided tour and get to know more about the volcano that built - and has, on occasions, nearly destroyed, Catania.

What do you enjoy most about living here?
The lifestyle in southern Italy and Sicily is much more relaxed than in the UK and the weather's way better - what's not to love?

How does the cost of living compare to home?
I moved to Italy from London, so anything would be cheap in comparison. However, in general, fruit and vegetables are significantly cheaper and of better quality, even in the supermarkets. If you then go to the daily market the cost drops again.
In contrast, clothing, toiletries and make-up are more expensive. I find this intriguing in a country where so much store is set on outward appearances. There are lots of outlet stores where you can buy designer goods at a knock-down price, but that price compares only to normally-priced clothes in the UK.

What negatives, if any, are there to living here?
Bureaucracy and confusion. The left hand often doesn't know what the right is doing and dealing with anything official can be a long and painful process. You can circumvent this if you know which palms to grease, but things should work properly for everyone, not just those who can afford to pay.

If you could pick one piece of advice to anyone moving here, what would it be?
Learn at least enough language to get by before you move here. It's possible to make friends without speaking Italian, but it becomes a lot easier when you do.

What has been the hardest aspect to your expat experience so far?
Finding out that one of my beloved cats, who had been with me since she was a tiny kitten, had died last November, aged 13. Had a human family member died I could have got time off work and gone back to the UK for the funeral, but as it was there was nothing I could do except cry all night and thank heaven that she had been living with my best friend and had died happy and well-cared for.
Missing births, marriages and deaths will probably be the most difficult aspect to relocation for many people. Facebook and email cover most bases when it comes to keeping in touch on a day-to-day basis, but these big life events really hurt when you miss them.

What are your top 5 expat tips for anyone following in your footsteps?
1. Learn the language.
2. Get out of the expat bubble and mix with the locals (this will help with no. 1)
3. Don't sweat the small stuff. Your time is better spent focusing on the good things about your new life than stressing about the things you can't change.
4. Don't expect it to be the same as where you've come from. Embrace the fact that you're in a different culture.
5. Be curious. Try the local dishes. Go to festivals. Most importantly, enjoy yourself!

Tell us a bit about your own expat blog.
Driving Like a Maniac is a blog all about telling stories. Yes, you can find a certain amount of nuts and bolts information on there, but it's not an information resource in the traditional sense of the word. What it is - because this is what interests me - is a way to record characters and the oddities of life that I see around me. So there is humour, there's sadness and there's reflection, because that's what life is like. However, above all what I hope you will gain from it is a feeling of what it's like to live here and become part of this delicious, maddening, wonderful culture.

How can you be contacted for further advice to future expats coming to your area?
Please contact me via my website http://katebailward.com/drivinglikeamaniac/contact-katja or my Facebook/Twitter/Google Plus profiles (see below).

Kate has her own expat blog called Driving Like a Maniac http://www.katebailward.com/drivinglikeamaniac which is very worthy of a visit. Kate can be found on Twitter @katja_dlam, her Facebook page or her Google Plus profile. Driving Like a Maniac has an ExpatsBlog.com listing here which has already received great reviews! If you liked this interview with Kate, drop her a quick note below too.

Comments » There are 5 comments

Great interview! I love Kate's blog and it's so fun to get to know her better through this article. :-)

Maglie! We had a very odd landlord in Rome who was from Maglie - he always brought us lemonds from his garden.

Judith: he might have been odd (I can well believe it), but at least he brought gifts! On a related note, the year I was in Maglie was the year that I made limoncello, due to friends having a glut of enormous lemons. Delicious ...

A really good read. Personal, but with great pointers! Having travelled myself years ago and now thinking of stretching my roots again, this has reminded me of some key points I'd forgotten being back in London. Well written, thank you.

Hello, I just stumbled across this page and its fantastic, I really enjoyed reading about your experience here in Sicily. I'm from Dundee in Scotland though I've been here in Sicily for the past 3 years, my nonna is Sicilian. I stay in Pachino, though I'm considering a move. Can I ask how you found work teaching English? I have experience but would really like to get into a full time job.. tired of doing bits and pieces. Also I'm a drum tutor, have been for 9 years, play in a band here. Finding work here is proving to be almost impossible though, maybe it's where i am. You've done really well in such a small amount of time! Complimenti :)