Want to get involved? Become a Featured Expat and take our interview.
Become a Local Expert and contribute articles.
Get in touch today!
Filed: Interviews,South Africa
Sine Thieme, also known as Joburg Expat among her fellow expats and bloggers in Johannesburg, moved from Kansas to South Africa in 2010 (just in time for the Soccer World Cup) together with her husband and four children, where she's learned to look forward to "This is Africa" moments every day because they give her such great writing material. Sine writes about their familyâs life in Africa and the great - and not so great - experiences they've had on her blog called Johurg Expat www.joburgexpat.com (see listing here and link in conclusion). 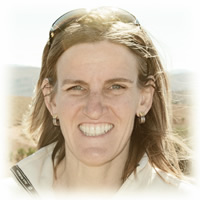 Here's the interview with Sine...

Where are you originally from?
I was born and raised in Tubingen, Germany and emigrated to the U.S. in the 1990s where I have lived in North Carolina, Wisconsin, and Kansas.

In which country and city are you living now?
Johannesburg, South Africa

How long have you lived here and how long are you planning to stay?
We have lived here almost 3 years but are due to repatriate to the US by the end of the year.

Why did you move and what do you do?
Iâm a trailing spouse to a husband who was transferred here for a project, and when I donât cater to the many needs of my four children or help out with a charity project involving baseball-playing kids in a township, I write stories about expat life on my blog, Joburg Expat.

Did you bring family with you?
Yes, the aforementioned four kids who are now ages 10-16.

How did you find the transition to living in a foreign country?
In many ways easier than I thought. First, it was our second foreign assignment so we were much more relaxed about everything being different. Second, people in South Africa are really nice and relaxed, taking a lot of stress out of everyday hassles. Many moving-related to-dos were actually more time consuming than they would be at home, like buying a car and dealing with utilities, but South Africa is such a nice place to live that you soon gloss over that.

Was it easy making friends and meeting people; do you mainly socialise with other expats?
We made one of our best decisions by enrolling the kids in a South African school, rather than an international one, and therefore most of our (and their) friends are South African, giving us a much better insight into the country and its people. We do have quite a few expat friends as well, which is always nice because you have so much in common with fellow expats, but the closest friends are the ones we made at school, also due to the fact that our schedules and vacations overlap more.

What are the best things to do in the area; anything to recommend to future expats?
Gosh â Iâve written extensively about what to do in Joburg on my blog at http://www.joburgexpat.com/2011/04/what-to-do-in-joburg.html, so Iâd recommend future expats start with that. You absolutely have to go on a safari when in South Africa. There are plenty of places close to Johannesburg, like Pilanesberg, or a little farther but still well within driving distance, like Madikwe Game Reserve or Kruger Park. Closer to Joburg you can visit the Lion Park, the Ann van Dyk Cheetah Centre at de Wildt, or the Elephant Sanctuary to view and interact with animals close-up, the Apartheid Museum, Soweto, or Lilieslief Farm for some history, go shopping at Montecasino, the Bryanston Organic Market or the Rosebank Rooftop Market, or for the adventure minded participate in a Magaliesberg Canopy tour, go skydiving, bungy-jump off the Soweto Towers, or soar in a balloon over the Cradle of Humankind.

What do you enjoy most about living here?
By far the weather, which most of the time is absolutely perfect â sunny but not stifling days and only a brief winter which is entirely dry but always unexpectedly cold, because somehow Joburgers suffer from collective amnesia when it comes to remembering how cold winter (from June to August) can be.

How does the cost of living compare to home?
Initially I was convinced it was higher than in the US, but now Iâm not so sure. Some things are more expensive, such as clothing and shoes, and I would say most food is comparable. Especially as you grow more accustomed to the different shops and whatâs on offer where, you will find it is very similar or in some instances even cheaper. Going out to eat is more affordable here. Gas/petrol prices are higher, but not nearly as high as in Europe. What usually gets most expats in terms of cost are travel expensive â travel in Africa is expenses and since there are so many must-see options you end up stretching your budget quite a bit. My advice in that respect is to recognize the once-in-a-lifetime opportunity to explore places like Botswana and Namibia, and to take advantage of it as much as you can, even if it means tightening the belt more again once home. My other advice is to go for the adventure rather than the luxury, going on road trips versus flying, going camping versus luxury lodges. Adventure beats luxury every single time in terms of the stories you can tell afterwards and the memories you take home. Our kids will be talking a long time about the time our tent flew off in Namibia and we had to camp under the stars, whereas they might already have forgotten what our rooms looked like in the nice hotel we stayed at in Zanzibar (though they certainly havenât forgotten the smell of the fish market we dragged them to there).

What negatives, if any, are there to living here?
Life is much more relaxed in Africa, and very enjoyable. Itâs easy to become spoiled by having affordable and excellent domestic help, a huge luxury in most Western countries. The problem is having to go back home and adjusting to a more hectic lifestyle again. The other downside to South Africa, in many peopleâs eyes, is its high crime rate, making it a necessity to be a bit more vigilant than you might be in your home country, and paying extra for housing in security estates, also restricting your movements a bit more than you might be used to from Europe, for instance. Add to this the fact that there is no public transport to speak of, and you will spend a lot of time driving your kids back and forth to events or playdates. Which brings me to another negative about life in Joburg, which is traffic. Itâs absolutely horrendous.

If you could pick one piece of advice for anyone moving here, what would it be?
Donât listen to anybody telling you, most likely over the internet, that South Africa is too dangerous to live and that youâll be at best mugged and at worst killed there. Many expats very happily live in Johannesburg and other cities and have never had any bad experiences. Secondly, you have to embrace the fact that South Africans have a different concept of time (I mean, who else has three different iterations of the word now â just now, now, and now now?) and that things will not be checked off your list just as quickly as you might be used to. Oh, and my other advice: Read Joburg Expat. Itâs full of advice for people moving to South Africa.

What has been the hardest aspect to your expat experience so far?
Having to move again just as everybody has fallen into a nice routine and made good friends.

When you finally return home, how do you think you'll cope with repatriation?
Like I said earlier, I imagine it will be tough in that you have to get used to a much faster pace of life again, and do it without domestic help. On the other hand, coming âhomeâ is always easier than going away, because many bureaucratic details fall away (like visas) or are much easier to understand. If I think about how much time it took getting our visas sorted, buying a car, settling our utilities accounts, Iâm almost giddy with anticipation how easy those things are going to be back home. But, and this is the weird thing: They wonât be as enjoyable. When you live in Africa, you learn to love the journey, not the destination.

What are your top 5 expat tips for anyone following in your footsteps?
- Be curious about the local customs and embrace them with all your heart.
- Donât only hang out with expats.
- Travel often and far.
- Send your kids to a local school.
- Invite people to your house early and often.

Tell us a bit about your own expat blog.
I started writing Joburg Expat in April of 2010, shortly after moving here (but not as shortly as I liked because getting my internet connection took weeks), as a way to give others the kind of information about South Africa that I never was able to get prior to moving here. My idea was to give advice, but itâs since evolved into much more â expat diary, collection of funny stories, a sprinkling of life philosophy and parenting, and travel blog. Itâs also been a good outlet for some pent-up frustrations, because, frankly, the crappiest situations make the best stories!

How can you be contacted for further advice to future expats coming to your area?
Through the contact form on my blog (see below for link)

Sine runs her own expat blog "Johurg Expat" http://www.joburgexpat.com which is a well worth a read, so please have a look. She can be found on Twitter @sthieme and her Facebook page. Sine's expat blog listing at ExpatsBlog.com can be found here where you can leave a nice comment should you like Sine's blog.