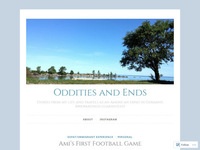 Oddities and Ends
Stories from my life and travels as an American expat in Germany. I use humor to talk about the cultural differences, challenges, and language difficulties I've faced since moving to Germany.
www.oaeblog.com
Website Social:

Website Reviews » There are 6 reviews on Oddities and Ends

I've known Jessie since she lived in the U.S., and her observations in her blog are always funny and interesting to read.

Always fun to read about her daily experiences!

Jessie's insights and views on the world are not only unique, they also remain relevant to the lives of people living in and out of the United States. I would highly recommend this blog for those already in Germany, people thinking about living in Germany, and for those who have just heard of Germany. Everyone should give it a read!