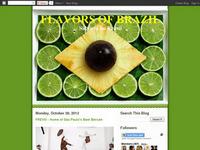 Flavors of Brazil
A Vancouverite who's living in Fortaleza, on Brazil's fabulous Northeast Coast. Learning all I can about Brazilian culture, with emphasis on the rich culinary traditions of Brazil.
flavorsofbrazil.blogspot.co.uk
Website Social:

Website Reviews » There are 3 reviews on Flavors of Brazil

One of my favorite South American expat blog reads - it's top of my reader list when there's a new post. I love James' explorations of the history and provenance of ingredients and dishes, along with recipes that are clearly written, easy to follow and produce great results.

If you are interested in the food of Brazil (and all the other culture that goes with it) then FlavorsOfBrazil should be your starting point. I use James' excellently written blog as a reference whenever I want to know more about anything related to Brazilian food. If I hear about a new fruit or some obscure dish, I can be sure that James will have written something interesting and authoritative on the subject. An excellent blog that is updated every week day.

I prefer Brazilian food a nice pork-bean with garlic seasoned rice, potato salad along with a fatty barbecue steak and radish-tomato salad.