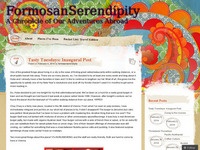 Elaine's blog paints for us a true picture of an American's life in Vienna. Her frankness, honesty, and ability to capture the personal side of even the mundane makes it enlightening and entertaining to read and share. The details are clear enough that the readers are left feeling as though they are part of the ex-pat life with her, and her ability to embrace the new and exciting and different makes us all want to be. Well done!

My wife has put her heart and soul into this blog. She came up with the idea before we moved to Austria about a year ago. I've read every one of her fantastic accounts of our life abroad and cherish each entry as something to look back on and remember. I'm very proud of her and her writing. I know she will continually write interesting articles and come up with more great ideas.

A well written blog about her new life in Vienna, Austria and her other adventures. Thanks!

I love reading Elaine's accounts not only of her expat life here in Vienna, but also her travels in other parts of the world, too. Even as another American living in Vienna, she has seen and done many things that I haven't, and I've learned a lot (and added quite a few things to my own "to do in Wien" list)!

Elaine's blog is fabulous! She gives such an honest, heartfelt account of her life abroad in Austria. Her pictures and writing are great - I feel like right there with her! A great read!

One of my most very favorite reads! Getting a notification that Elaine has posted a new blog entry literally makes my day. Keep up the fantastic work!!

Thank you for your interesting article and colorful photos!