Expat and the City

Expat and the City
Adventurous, American girl living and working in Kuwait while supporting our US Troops overseas in the Middle East. You can follow my daily expat life experiences in Kuwait, travels around the world and whatever interest
expatandthecity.blogspot.com
Website Social: 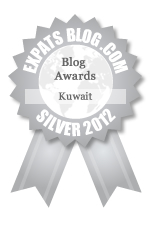 This blog won the Silver Award for best expat blog in Kuwait!

Website Reviews » There are 10 reviews on Expat and the City

I've been following Expat and the City's blog since mid 2010 and I follow it religiously mainly because it's different from the other Kuwaiti and Expat blogs, which is manifested in posts about Kuwait, non-profit, charity, and hilarious personal life. Congratulations Expat.

My favorite blog I read while in this country.

Hope she gets back with H.

I found your blog through a Birkin bag search. I thought what crazy lady would live in a country like Kuwait. Now I can't stop reading your blog and I might actually teach there for a year. I just need to know how did you ship all your bags?

I received a job offer to teach in Kuwait and found your blog through bing. Thank you for the article on what it's like to work in Kuwait. It answered a lot of my questions.

I am trying to read the entire blog before I move to Kuwait and I have made it to 2012. Good stuff!

Hello, I am moving to Kuwait next spring with my daughter to join my Husband who has been working there for over three years now. I was looking for blogs to help myself get an idea and perhaps prepare for life over there. However, it denied me permission to read saying I needed to be invited to read this blog. So, if you don't mind opening up your blog to another soon to be ex pat, I'd sincerely appreciate it. All the best, Valerie